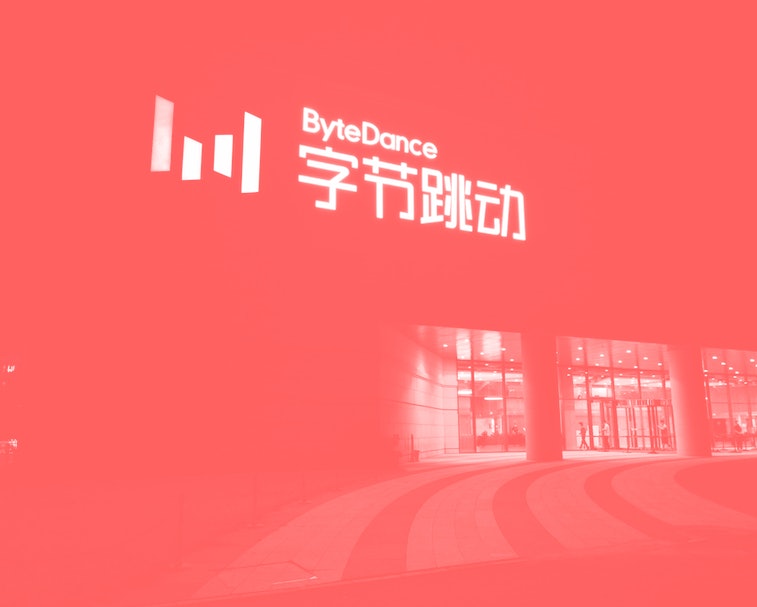 ByteDance is doubling down on its efforts to keep complete control of TikTok around the world. The China-based company said this morning that TikTok Global will continue to be a “100 percent” fully owned subsidiary, The Financial Times reports. ByteDance posted a statement on Jinri Toutiao, the company’s Chinese social media platform, on Monday morning.

The company’s statement stands in direct opposition to reports from this weekend that suggested ByteDance was still very much interested in selling a portion of its U.S. business to either Walmart or Oracle. Both companies, as well as President Trump, made statements insinuating as much — as recently as yesterday.

“I have given the deal my blessing, if they get it done that’s great, if they don’t that’s fine too,” Trump said just yesterday. “I approve the deal in concept.”

The chaotic energy of this potential deal — which seems to have gone from a full buyout to nothing at all in less than a week — is rivaled only by the TikTok experience itself. Which, if the Trump administration has its way, will no longer be an experience those in the U.S. can enjoy a few months from now.

What a mess — The plan around TikTok has changed so many times in the last month or so, to an extent that makes it clear nothing good is coming of it, at this point.

Two weeks ago we were pretty sure either Microsoft (along with Walmart) or Oracle would be scooping up all of TikTok’s U.S. business. Last week we learned that TikTok had denied bids from both Microsoft and Oracle to do so.

But both Walmart and Oracle still seemed dedicated to the potential of buying at least part of the company’s operations. Just this weekend, Oracle and Walmart issued a joint statement confirming a purchase of 20 percent of the newly formed TikTok Global business. The statement reads:

“As a part of the deal, TikTok is creating a new company called TikTok Global that will be responsible for providing all TikTok services to users in United States and most of the users in the rest of the world. Today, the administration has conditionally approved a landmark deal where Oracle becomes TikTok's secure cloud provider.

So…uh…what’s going on — Your guess is about as good as ours here. There seems to be some miscommunication between Oracle, Walmart, and ByteDance.

In their joint release, Oracle and Walmart said that “all the TikTok technology will be in possession of TikTok Global.” ByteDance today wrote on Jinri Toutaio a conflicting statement: that the proposal does not include the “transfer of source code or technology.”

ByteDance has been tiptoeing around the idea of transferring its source code out of China. The Chinese government would likely view this as an "export" and would therefore need to approve it before the deal could be made final.

This doesn't seem helpful — The sale of a 20 percent stake in TikTok Global is unlikely to quell the Trump administration’s concerns. Trump’s whole reason for banning TikTok is because of security concerns related to the tech being housed in China — and apparently that’s not changing any time soon.

Trump originally planned to ban TikTok from U.S. app stores as of this morning, but that date was pushed to September 27 to give more time for a deal to be finalized. Unless some conclusions are made by this coming weekend, TikTok users might be cut off from the app as soon as November 12.

There is no clear path forward here. Trump wants TikTok’s U.S. operations to be based entirely in the U.S. ByteDance is unwilling to relinquish control of TikTok’s algorithms and other underlying technology. Nonetheless, Oracle and Walmart appear to be pushing forward with their purchase of 20 percent of the company’s stock. Where this will end up is anyone’s guess — if anything’s certain, it’s that there’s no solution left that will please everyone involved.