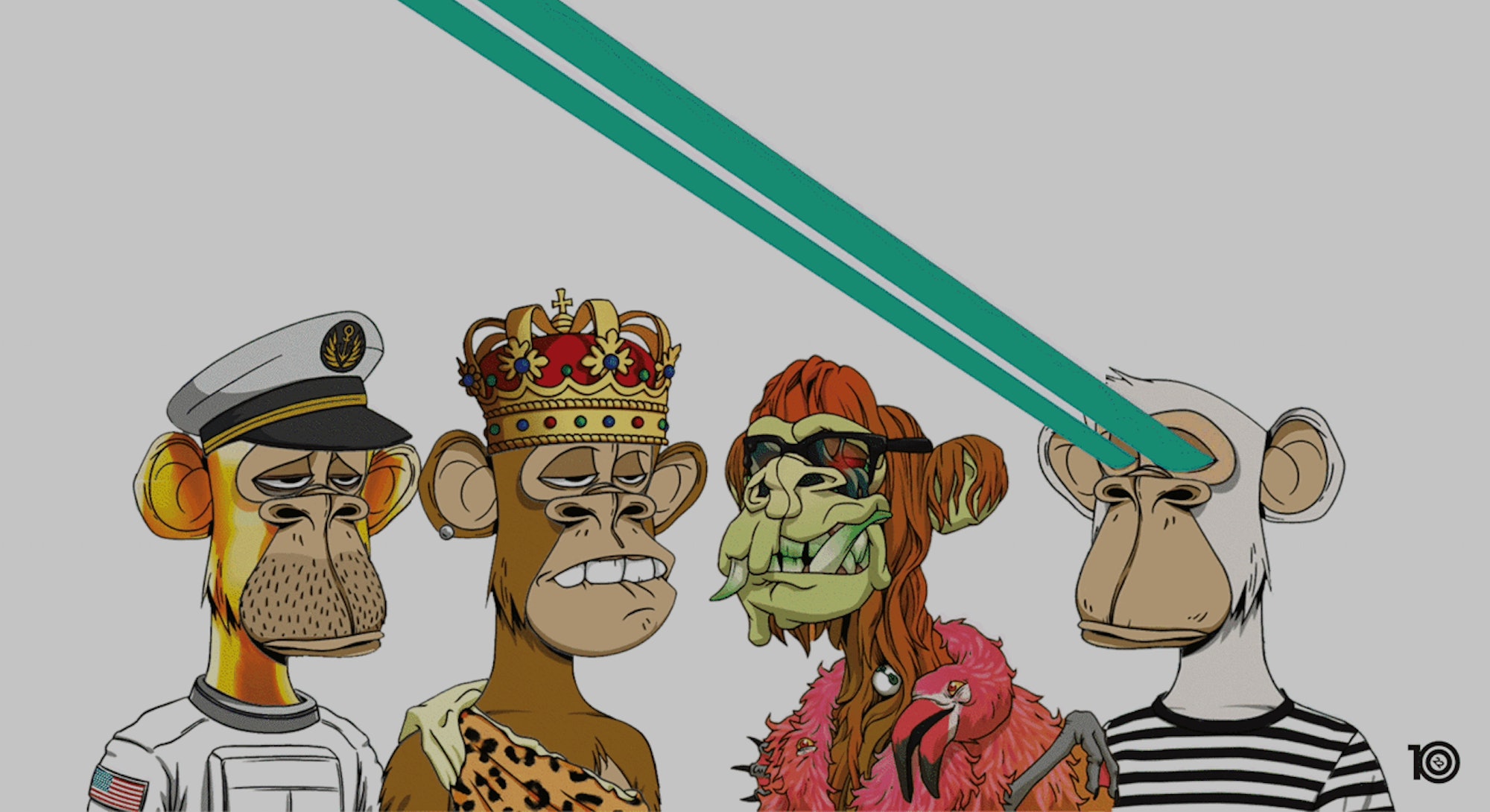 Disclaimer: I own crypto and NFTs. In fact, I have some NFTs for sale from Ape Fest 2021, which I attended in a personal capacity. I do not own any Bored Apes or their derivatives.

Bored Ape Yacht Club (BAYC) is a community of people who own BAYC NFTs, of which there are only 30,000 between the original 10,000 Bored Apes and the 20,000 Mutant Apes. Anyone can buy a Bored Ape on OpenSea, but it’ll cost you at least 42 ETH (about $197,442) for an original ape at the time of this writing. So that should give you an idea of how much hype — and, NFT proponents would argue, value — these jpegs are generating.

What many don’t realize is that owning an NFT is often more than just having an image on OpenSea. Ownership of an NFT can get you into exclusive parties, entitle you to vote in decentralized autonomous organizations (DAOs), give you access to future airdrops, and of course, put you in close proximity to the other owners of those NFTs. And in BAYC’s case, those other owners either were — or are now — very wealthy.

This brings us back to Kingship, the four-ape group signed by 10:22PM. The company says that it will “guide the group in developing and releasing new music, NFTs, community-based products, activations and experiences in the metaverse, and kick off a new generation of artist, fan and community engagement.”

I know a thing or two about NFTs and crypto, but as someone who doesn’t normally report on the entertainment industry, I had absolutely no idea what this announcement actually meant. So I called Celine Joshua, a music-industry veteran and founder of 10:22PM, to get some answers. The interview has been lightly edited for clarity.

Tell me a little bit about your background and what led you to create 10:22PM.

Celine Joshua: So I’ve been in the music business for a minute, and I've been lucky enough to work with unknown artists and some of the biggest artists in the world, and part of their development journey was going from download to streaming. So Web 2.0 was what allowed me to innovate on some of the stuff that I did in my previous role, and then I was sitting there, and I thought, ‘If I’m able to do this, why don’t I go and do some go and build something on my own?’

I was sitting in my room, and we were like, ‘What should we call it?’ And I just happened to look at the time and it was 10:22 pm, and that was it. And so everything about 10:22PM is about innovation, ideation, building, artists, IP, but it comes from a place of love and passion. I don't touch anything I don’t love.

Let’s talk about Kingship. So who is the person who owns these apes, j1mmy.eth?

Jimmy McNeils. He’s an NFT enthusiast, a really big collector, and also an incredible human being. He’s native to the space, and he’s somebody that I thought was very authentic and would understand the idea [for Kingship] and have fun building it. I looked through his collection and started seeing these characters and the storytelling and the things that could evolve from them. So Kingship was created by literally curating the right apes.

“I understand that comparisons have to be made. The Gorillaz are the ones that have laid the foundation.”

Why these specific apes?

They’re the group, the band, and part of the narrative and storytelling will unlock. And you as an audience, you as a reader, you as a writer, will learn more about them and why.

Can you tell us about what we should expect? Are we looking at music first? What’s the rollout plan?

So some of the people reacting to this announcement have made the comparison to the Gorillaz. What do you say to that comparison?

Do you think fans can expect similar things to what the Gorillaz have put out over time?

Celine: I understand that comparisons have to be made, especially when new artists show up. The Gorillaz are the ones that have laid the foundation, laid down the path, so there could be an understanding of what’s next and who’s next.

Later that day I spoke with Nick Adler, Kingship’s manager. Here is our conversation, again with light editing for clarity.

Okay, first thing’s first, tell me a little bit about yourself and how you know Jimmy.

Nick Adler: I’ve been working in the music industry for a long time, in the brand world, creative agency stuff. And I’ve actually been working with Snoop Dogg for a long time; he's been a client for many years. I helped him with writing his branding endorsement stuff, and his early tech investment stuff.

When I saw the NFT market happen, I got really excited and it reminded me of 2007 when we were seeing the social media explosion. And in 2007, I felt like we were passengers in the entertainment world. Whereas with the current Web 3.0 stuff, I realized we could build stuff and own our assets. So I got really excited about it and jumped headfirst into the space, really to think about it on behalf of Snoop.

And for that process I connected with a lot of OG NFT collectors, as well as developers, notably, a kid named Frankie Nines. He’s just always been a really creative developer. So he went to work for companies like Dapper Labs and a few other cool companies. He started showing me stuff, and he told me about Jimmy, and he said “You know, I’m working for Jimmy, you got to meet him. He’s starting a new company called NFT 42.”

“These four apes are remarkable.”

So Jimmy and I connected. We jumped on a call, we liked each other immediately. He was telling me about a marketplace idea he was building, and within a few hours, I’d helped him meet a few people and overnight he raised capital for his startup. He ended up becoming my advisor in the NFT side and the collectible side.

The cool part was that this was right around this time when the Bored Ape mint happened. He and a couple of other NFT influencers like Pranksy, a guy named OhhShiny… Yeah, they were the ones who initially minted the apes, and they didn’t immediately sell out, which is crazy to think about now. Anyway, Jimmy called me the next day and was like, “Hey, what’s your wallet? I want to send you something.” So I sent him my wallet address, and he sent me three apes.

So let’s talk about Kingship. Why these four apes?

These four apes are remarkable. The golden ape, well, Jimmy's had two golden apes, one of which he recently sold, and it was the largest sale so far, it was a $3.4 million dollar ape. Kingship is a creative way to utilize the apes and continue to build value around the apes without having to put them out on the market.

The other ape has the crown, hence the name Kingship. And then we have the laser eyes ape because, again, super-rare, but it also reflects some of the key traits of the NFT and crypto world. And then we thought it was really fitting to put a Mutant Ape in there. It’s a pimp coat mutant, and it just embodies this cool, really rare mutant, but different.

Celine Joshua and I connected, and that’s the moment where I said, “You have to meet Jimmy.’ She saw Jimmy’s apes and was like, “Oh my god.”

Jimmy is the collector. He’s the one who purchased the apes and retains the rights to the apes. I’m part of the creative partners, and I manage the group like any other manager would manage an artist. For me, I’m thinking about the future of the apes and things like branding and endorsements, stuff like merchandising, what’s the look and feel and things like that.

“The goal here isn’t to just do something a legacy brand would do — the goal is to be Web 3.0 authentic.”

With 10:22PM and Celine, we’re working to create the sound, the narrative and the storytelling, the voice. We’re working on creative ways to release NFTs and music. The goal here isn’t to just do something a legacy brand would do — the goal is to be Web 3.0 authentic.

So things like, How do you engage with music and a story and assets on the blockchain? How do you purchase it? How do you gauge what’s in your wallet? How can you trade it? And the art has to be exemplary — 3D renderings, all this stuff has to come to life, and it’s all happening in real time.

Cool. So what happens next?

So what happens next is what happens with most of these projects where we release a roadmap, and the plan is to create these personas in real time. So soon enough you’ll learn the names of these apes, what makes each individual special, what their own musical tastes are, what instruments they play, what their goals and intentions are. You could eventually see one of these apes becoming the face of a high fashion brand on a billboard on Sunset Boulevard.