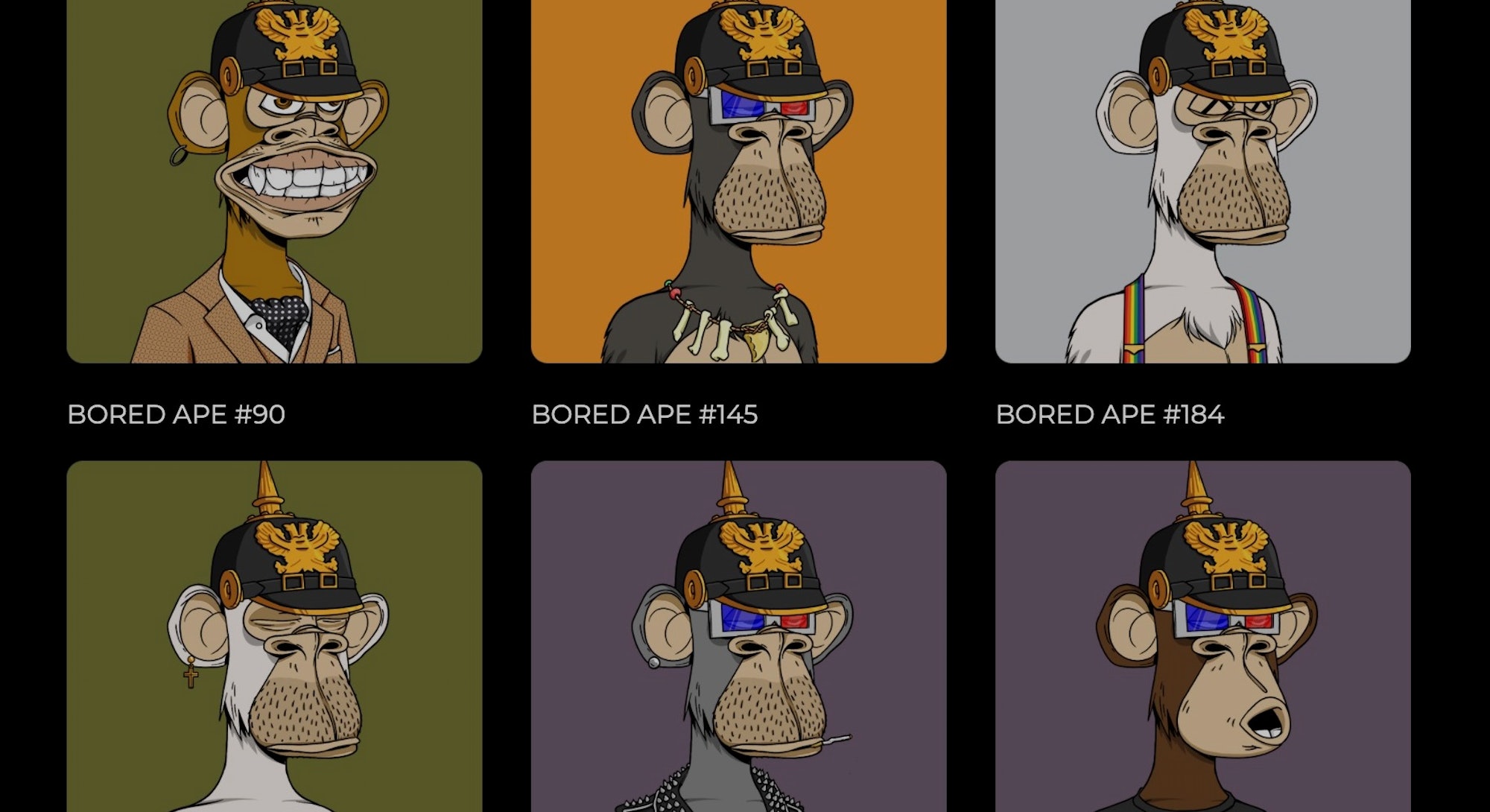 Some days, it feels like the entire internet has gone ape.

Not everyone is buying into the hype, though. In particular, creative director Ryder Ripps — best known for collaborating with artists like Kanye West and brands like Gucci and Soylent — has been amassing an archive of evidence about what he sees as the Bored Ape Yacht Club’s many neo-Nazi and racist references.

Since late last year, Ripps, who was raised in a Jewish family, has been sharing his findings via social media. On Twitter, Ripps has faced severe backlash about the nature of his research, though plenty of others have stood behind his findings or even added to them. He’s compiled his research at gordongoner.com — a site named after the pseudonym of one of BAYC’s co-founders.

“They’re trolls,” Ryder says of the Bored Apes team in an interview with Input.

Gordon Goner, along with the similarly pseudonymous Gargamel, Emperor Tomato Ketchup, and No Sass are are the official founders of BAYC. An artist who goes by Seneca created the initial sketches; five other artists turned her ideas into the 10,000 apes NFTs in existence.

Yuga Labs, the company that owns Bored Ape Yacht Club, outright denies connections to any extremist imagery. Moreover, co-CEO Nicole Muniz says that very idea runs opposite to the sense of community the BAYC wants to foster. She characterizes Ripps’ barrage of BAYC-targeting tweets as very aggressive. “It is deeply painful,” she says. “It’s disturbing.” Meanwhile, experts from the Jewish organization the Anti-Defamation League consulted by Input have also cast doubt on the evidence presented by Ripps.

Ripps’ claims of the Bored Apes’ connections to Nazism begin with the collective’s logo. The monkey’s skull, bordered on all sides by text, is “very similar” to the Totenkopf symbol utilized by Nazis, he writes on his webpage. He points out that both images depict skulls with 18 teeth.

However, Mark Pitcavage — a senior research fellow at the ADL’s Center on Extremism who has on many occasions been called as an expert in court cases — tells Input that he sees no connection between BAYC’s logo and the Nazi Totenkopf image.

“The Nazi Totenkopf is one very specific graphic design of a skull and crossbones,” Pitcavage says. “And the monkey skull resembles it in no way except insofar as all skulls resemble each other to a certain degree.”

Pitcavage also points out that the Nazis were by no means the first to adopt the Totenkopf — and, in fact, the version used by the Waffen-SS (the combat branch of the Nazi party’s SS organization) predates the Nazi party entirely. “It dates back to the Prussian military, way before Adolf Hitler was even born,” he says.

The more you dig into Ripps’ research, the more tenuous the links get. Some Bored Apes wear a helmet known as a Pickelhaube; Ripps points to this as further evidence of Nazi sympathies. But the helmet in question was actually worn by Imperial German soldiers.

“When I first read his blog post, I actually had to look that [reference] up. And I’ve been studying white supremacy for 27 years.”

“Imperial Germany is two governments before the Nazis,” Pitcavage says. “It is true that some white supremacists will fly an Imperial German flag, because the Nazi flag is prohibited in Germany.” However, he says, other Imperial German images, like the Pickelhaube, are not at all associated with Nazis.

Some of Ripps’ points — like the fact that Yuga Labs launched the Bored Apes on April 30, the day of Hitler’s death — are nothing more than coincidence, according to Pitcavage. “The date Hitler died isn’t even a date white supremacists celebrate,” he says.

Ripps also points out on his site the similarity between Yuga Labs’ name and that of Kali Yuga, a “popular element of alt right/traditionalist ideology.” But calling Kali Yuga “popular” is very much a stretch, Pitcavage says. “When I first read his blog post, I actually had to look that up,” he laughs. “And I’ve been studying white supremacy for 27 years.” (The Hindu concept of Kali Yuga has been called upon by the alt-right, at times, though it is by no means common.)

Earlier this year, as Ripps continued to tweet his research, Yuga Labs — which hasn’t taken on his allegations head-on until now — subtweeted him. The company’s name, it tweeted, was taken from a villain in the popular Nintendo 3DS game A Link Between Worlds — a sorcerer who can turn characters into paintings.

Muniz echoes the sentiment of that tweet: “We’re all just video game nerds.” Muniz leads Yuga along with Gordon and Gargamel; she refers to them as a “three-headed dragon.” When asked about Ripps’ allegations, she begins by bringing up that Gordon is Jewish. Guy Oseary, a high-profile partner in the company, is Israeli, she adds. (That members of the team are Jewish, of course, doesn’t necessarily mean Nazi imagery couldn’t have made its way into the project.)

Muniz says that Yuga Labs considered getting lawyers involved or sending Ripps a cease-and-desist but decided the best route was to keep its head down and keep moving forward.

“Some of it is clearly offensive. It’s not exempt from criticism.”

On Twitter, users reacting to what Ripps has to say have fallen mostly into two camps. Some users — especially those who own apes and consider themselves part of the BAYC community — have denied his allegations outright. “I never for a moment thought there was anything racist about BAYC,” one owner tells Input. “It never crossed my mind, and when all this stuff was brought up, I didn’t see the connection.”

Others have taken Ripps’ research to the opposite extreme, digging for “evidence” to the point of near-conspiracy. While much of Ripps’ research centers on specific visuals with similarities to Nazi imagery, other Twitter users have extended this search to the far ends of confirmation bias. Like claiming the BAYC’s Kennel Club — a collection of canine NFTs offered for free to each member — is a reference to Hitler’s love for dogs.

Neither Pitcavage nor Carla Hill, another senior researcher at the ADL’s Center for Extremism, are willing to let BAYC off scot-free, though. They agree with Ripps’s points that a “hip hop” trait (which gives apes a gold chain and gold teeth) and a “sushi chef headband” are both problematic. The former, Ripps says, is a stereotypical presentation of Black culture; the latter, he says, is a stereotypical depiction of a Japanese person.

Ripps also points to less obvious examples of BAYC art that could be seen as problematic. In a teaser for the collective’s first video game, for example, one of the enemies' weapons appears to be bananas arranged in a Swastika-like shape.

“Some of it is clearly offensive,” Hill says. “It’s not exempt from criticism.” But Pitcavage notes that this is a very small subset of the 10,000 available apes. “Some look problematic out of context,” he says. “They look less so in the context of all the others.”

Muniz concurs. “When you look at one or two variables in a vacuum, you might see something that comes across as sketchy,” she says. “But I think it’s important to think about the fact that we deeply reference culture, all kinds of culture. Like the Hawaiian shirts, which [Ripps] says are racist because of the Boogaloo. Here’s the thing: Go google the Magnum P.I. Hawaiian shirt.”

Both Pitcavage and Hill agree that, overall, Ripps’ research does not point to any specific group of extremists. “If you’re an extremist, you have a set ideology,” Hill says. “You don’t dabble in all different kinds.”

Meanwhile, tensions between Ripps and BAYC have escalated. Yesterday, Ripps noted that the official BAYC Twitter had blocked him. The designer pointed to this turn of events as evidence that he is “officially winning.”

Update, 2.3.22: An earlier version of this article attributed a quote to Ripps; it was actually said by BAYC co-founder Gargamel.