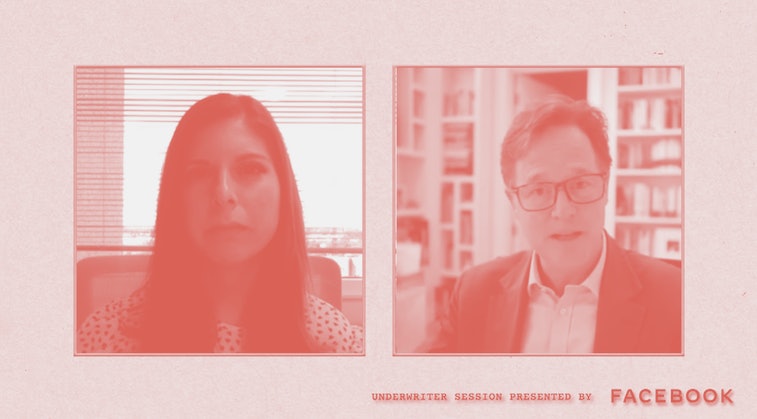 Peter Kafka, host of the popular podcast “Recode Media,” tweeted yesterday about a very strange ad he was served on The Atlantic’s website. The advertisement, which showed up in the middle of an article Kafka had been reading, depicted a conversation between Facebook executives (Andrew Bosworth, VP of Facebook Reality Labs, and Nick Clegg, VP of Global Affairs) and two journalists. The ad, it seemed, had been paid for by Facebook itself.

Kafka says he did a “double and triple take” when the ad showed up mid-article. This is understandable, given that the journalists featured in the video — Peter Rubin of Wired and Sara Fischer of Axios — are well-regarded in tech reporting.

To complicate matters even more, Fischer responded to Kafka’s tweet a few hours later stating that the interview had been done with “complete editorial independence.” Axios had never been told Facebook would be using the interview to advertise for itself. Yikes.

Unclear what happened here — After initially tweeting about the strange ad, Kafka did a little digging, it seems, and found a few pertinent details about the video. The interview had been recorded as part of the Atlantic Festival, The Atlantic’s annual live event conference. It was not created by The Atlantic’s editorial team, according to a disclaimer in the video’s description, but by an underwriter. It was sponsored by Facebook.

The video in question.

It’s not strange that Facebook paid to be featured at the Atlantic Festival, which is attended by thousands every year. But Fischer says specifically that Axios was never made aware of plans to later use the recorded interview as sponsored content. Which means Facebook either purposefully left out this fact when scheduling the interview or the lines of communication ended up getting crossed at some point.

Messy damage control — It’s impossible to tell from outside this situation who is at fault for not communicating Facebook’s intention to use the interview as sponsored content. More important than the how of this sponcon is that it happened at all.

But then again: This is Facebook we’re talking about. Facebook, whose main PR guy thinks being combative on Twitter is the best way to present Facebook to the public. The company run by Mark Zuckerberg, who believes the public should just believe whatever he says with no evidence.

Facebook — sorry, Meta — is still reeling from the fallout of its biggest public-facing scandal ever. Its PR response to that crisis has been messy to the point of confusion. In that context, running sponsored content without making these journalists aware first seems pretty par for the course.