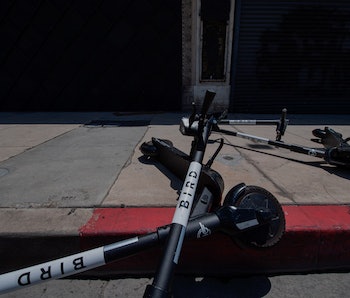 On Tuesday, OneZero reported on Bird’s fleet manager program which began shortly after the pandemic began. The e-scooter sharing company is passing off liability, repairs, and other operating costs to former chargers (contractors who collect and charge scooters) for the promise of eventually taking home 80 percent of the profits as fleet managers. Initially, however, a combination of scooter debt and an assortment of fees leaves these new fleet managers with only 30 percent of what they earn every week.

Scooter schemes — Even before the pandemic, e-scooters were quickly becoming the bane of many people’s — particularly legislators' — existence. The nascent industry spurred injuries and littered city sidewalks, fueling bans in different parts of the country. Once the lockdowns began, demand for the scooters plummeted and chargers were left in the wind.

In an attempt to retain contractors, Bird pivoted a franchise program originally directed at commercial entities like bike rental shops to create a system for these chargers. As fleet managers, they would finance thousands of dollars worth of scooters from Bird to operate within a certain area. An invoice reviewed by OneZero showed that weekly paychecks deducted 30 percent for the scooters, another 20 percent as a service fee, and city, sales tax, and promotional fees taking another 20 percent.

Once the scooters are paid off, Bird only takes the 20 percent service fee for use of the app, but a contract revealed that fleet managers will never own the scooters. The payments are referred to as “equipment fees” which must be paid even if a scooter is lost or broken and even if the contract is terminated.

The managers OneZero spoke to had no complaints with their income, citing a surprising amount of demand after the initial lockdown slump. Many are able to make profits good enough to employ a small team to help with the physical labor of charging their fleets while a solo manager reported earning $5,000 a week.

Still, another fleet manager worried about breaking the contract due to the grinding schedule. He was told Bird would forgive the debt if anyone exited the agreement, but based on the legal terms, that doesn’t seem to be true. Bird uses GPS to make sure scooters are kept in circulation and has even encouraged another manager to find someone to keep their fleet running while on vacation.

Dissolving responsibility — Through this franchise program, fleet managers are extremely exposed to litigation. Managers are responsible for the repair and maintenance of the scooters — the parts for which are bought from, you guessed it, Bird — leaving them open to liability for injuries despite waivers signed by users. The cost of repairs is another issue altogether with people modding scooters, destroying them, stealing them, and using or leaving them in the epicenters of this summer’s police brutality protests.

Even when local laws are directly affecting fleet managers, they’re on their own. Following a Dallas ban fueled by late-night “joyrides,” fleet managers were the only ones lobbying local legislators; Bird representatives were reportedly never in attendance.

As the sun sets on the rampant mistreatment of gig workers, especially in California, companies like Bird, Uber, and even FedEx are embracing franchise models. In an effort to avoid treating their workers like people who deserve consistent pay, benefits, and a work-life balance without actually losing their workforce, they’ve found a new way to exploit them.