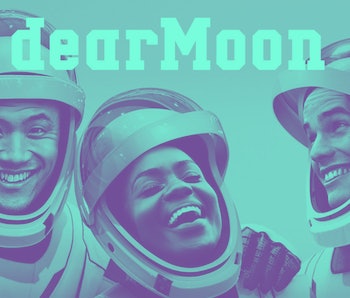 Yusaku Maezawa, the Japanese billionaire behind the country's largest online fashion retailer, announced a contest yesterday that will allow winners to hop aboard his upcoming SpaceX moon trip like some kind of Reddit-ass Willy Wonka. The founder of Zozotown revealed his initial lunar intentions alongside fellow Tony Stark-wannabe, Elon Musk, at the latter's SpaceX headquarters in Hawthorne, California, back in 2018.

Originally planning to draw his fellow six to eight shuttle-mates from a pool of artist applicants, Maezawa (or MZ as he often refers to himself) has now apparently widened his search to include lowly plebeians like you and me, since "maybe every single person is doing something creative could be called an artist." How thoughtful of you, Mr. MZ.

At least it beats his last idea — As noted over at The Verge, this isn't the first time Maezawa's lunar plans have shifted since they were initially made public three years ago. In January of last year, MZ announced his desire to select a "female partner" for his little jaunt to the moon, because sure, why not? The space-girlfriend project netted nearly 28,000 applicants and a deal with a Japanese streaming service for a Full Moon Lovers reality show, but plans fell apart entirely within weeks after MZ cited "personal reasons" for cancelling his quest for love.

That 2023 launch date is a long shot — Other than MZ's shifting crew criteria, there really hasn't been a whole lot of updates on the project since its original announcement. On SpaceX's end of things, its reusable Mars rocket system, Starship, is still in the very early (read: potentially deadly) phase of development, with two recent test flights ending in fiery explosions. While the company's president, Gwynne Shotwell, says a successful Starship orbit flight could come by the end of the year, Musk has stated in the past that there will need to be "hundreds of missions with satellites before we put people on board," which is a lot to expect within the next couple years.

Can rich people not ruin space for the rest of us? — Regardless of when a Japanese fashion billionaire and his crew of "creative" astronauts head up to gander at the moon, Maezawa's project is an absurd reminder of how the uber-wealthy are already managing to ruin the wonders of the universe for the rest of us.

Although organizations like NASA are still doing some badass work, space exploration has become increasingly privatized in recent years, and it won't be long before we are inundated with billionaire after billionaire announcing their intentions to launch themselves into outer space while the rest of us are still waiting on pandemic relief checks. Wealthy tycoons might toss a seat or two out there to the public for PR's sake, but it's a sad reminder that humanity's capacity for innovation, wonder, and excitement keeps getting eclipsed by rich dudes posing for their next space selfie.