“Because how can a generation that lives online know anything about the real world?” 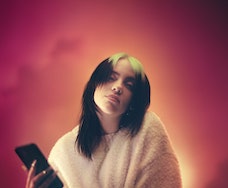 Billie Eilish has teamed up with international music marketing program Telekom Electronic Beats — a subsidiary of telecommunications giant Deutsche Telekom — for a new campaign called “What We Do Next.” The first product of the campaign is a meandering advertisement that’s meant to be about tech positivity. But the two-minute video mostly just comes off as a cringey, overproduced montage in praise of Gen Z.

“Look at us,” the ad begins over one of Eilish’s songs, “Just a bunch of kids who are screen-obsessed. Disconnected. Not in the moment, right?”

The #WhatWeDoNext campaign is meant to liberate young people from the feeling that their use of technology makes them lazy. And, to be fair, this is definitely a struggle for younger generations and one that doesn’t often receive the press it deserves. In attempting to confront these biases, though, Telekom kind of misses the mark.

Good intentions — The campaign has its heart in the right place — particularly in its overarching statement that, in 2020, technology is necessary for just about every kind of social growth and innovation. Now, more than ever before, technology keeps us connected to each other and the world around us while we’re stuck in pandemic mode. Technology is being used to fuel and document movements of social change like Black Lives Matter. As the company notes on the campaign’s landing page, technology allows us to “progress towards an egalitarian future.”

And younger generations — especially millennials and Gen Z — use technology on a much more regular basis than older generations. They’re the ones that end up hearing the most criticism about their tech habits, whether that’s aimless scrolling, creative ventures, or social justice initiatives. A recent Telekom survey found that 69 percent of European Gen Z feel their use of technology is viewed negatively.

Appealing to the wrong people — But it's impossible to ignore the fact that this is all coming from a massive telecommunications company. The Billie Eilish x Telekom video ultimately comes off as confused.

The video, which is narrated in its entirety by Eilish, is a montage of protest footage, neon raves, sustainability photoshoots, and animated ethical hacking. These images and their implications will feel familiar to anyone who spends a lot of time on the internet. But the combination of flashy visuals and a Billie Eilish voiceover is unlikely to appeal to the audience that actually needs to hear this message. Gen Z will appreciate the video, sure, but it’s difficult to believe it will actually change the minds of people who need their minds changed.

Nonetheless, the video is a welcome break from the nonstop hellscape of a news cycle we’re living through right now. And it does have a good message — it’s just a little misguided in how it presents that message.