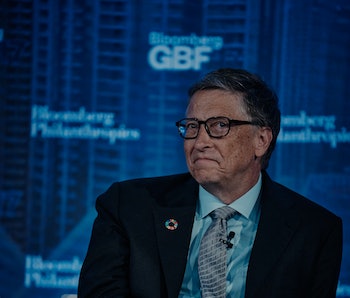 Bill Gates stepped down as Microsoft CEO in March 2020 amidst an investigation into an alleged, years-long affair with a coworker, but it should probably come as no surprise that one of the men on Jeffrey Epstein’s flight logs already had a well-known track record about that kind of thing. Per a new report from The Wall Street Journal, a former HR chief and former General Counsel both confirmed Gates’ history of being an absolute and total horndog creeper goes (at least) as far back as 2007.

According to the WSJ, Gates exchanged a number of flirtatious emails with a “midlevel female employee” that eventually included a proposition to meet outside of work. The two never did so, but both the chief of HR and General Counsel took Gates aside to ostensibly slap him on the wrist. “Mr. Gates didn’t deny the exchanges, told the executives in hindsight it wasn’t a good idea and said that he would stop,” the article recounts.

In the end, Microsoft’s executive board decided not to pursue the matter further given there was no physical interactions... unlike that most recent incident.

Gates denies it — For what it’s worth (not a hell of a lot) Gates’ PR people issued a thorough denial of the story to both the WSJ and The Verge, stating, “These claims are false, recycled rumors from sources who have no direct knowledge, and in some cases have significant conflicts of interest.” So there’s that. Just trying to be “fair” here, is all.

A theory with real evidence — In all honesty, as icky the newest revelations about Gates are, they at least have real merit to them, something that has been sorely missing from recent conspiracy theories surrounding Microsoft’s billionaire founder and the COVID-19 vaccines.

For months, the entrepreneur and philanthropist has been the center of countless outlandish ideas related to misinformation surrounding the coronavirus. Obviously, exactly zero of this bullshittery is true, so it feels a bit more grounding to return to clandestine events with actual proof behind them. Though, admittedly, if we were Bill, we might try and link it to the lunatic fringe so as to deflect from the reality that we were a bit of a creeper in our heyday, and a reminder about the effects of enormous power on mere, hormone-laden mortals.