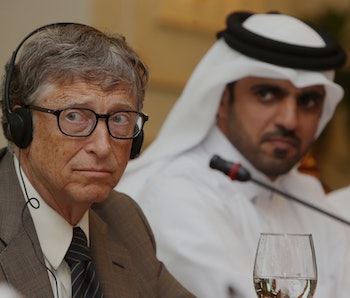 Facebook has long maintained an impressively terrible reputation for handling problematic content within its English-speaking communities, but a new report from Wired published earlier today details an even more troubling bastion of misinformation and conspiracy theories: Arabic-speaking Facebook.

Research conducted by the Institute of Strategic Dialogue (ISD) turned up at least 28 pages and groups reaching a combined 2.4 million people in the Middle East, all of which primarily promoted various Bill Gates-related conspiracy theories concerning COVID-19, global genocide, and vaccine profiteering.

As bad as the social media giant’s handling of English-speaking falsehoods and violent rhetoric has been in the past (and still is), many are worried its inrability to properly moderate Arabic user content could prove even worse given the region’s rapid adoption of the social media platform in recent years.

“It was way too easy to find this content,” Moustafa Ayad, ISD’s executive director for Africa, the Middle East, and Asia, to Wired. “... I’m talking about videos with millions of views about Bill Gates blocking the sun, or Bill Gates plans to put the mark of the beast in individuals through an injection.” And before you scoff at the absurdity of such claims, we have one letter for you: Q.

A case of simply not allocating the proper resources — Although a Facebook spokesperson told Wired the company employs three separate Arabic fact-checking agencies, it’s clear the current resources are not equipped to handle the sheer scale of the conspiracy theories and viral misinformation. According to the Middle East Institute’s Eliza Campbell, “The likelihood is that they just have not invested the human power, or made the investment in proper kind of subject matter experts when it comes to knowing how to design these policies.”

Not only limited to Facebook — Of course, the newest rounds of ridiculous, dangerous conspiracy theories aren’t limited solely to Facebook. “It’s not just a Facebook challenge. It just happens to be most of the content that we can track and monitor is on Facebook, and it’s connecting us to some of the other stuff,” explained Ayad. Nothing unsavory on the internet happens in a vacuum, and Facebook’s inability to get and maintain a handle on the countless conspiracies inevitably increases the likelihood of them spreading to other social media platforms like Twitter and Telegram.

There is evidence that this is a regular occurrence already. A popular conspiracy site, the Center for Reality and Historical Studies, was recently removed by Facebook after being reported for antisemitic sentiments and fear-mongering. Members soon flocked to a backup page on the platform, implying some kind of coordination via other social media channels like Telegram.

Better handling the burgeoning Arabic conspiracy theory channels won’t solve the issue entirely, but it certainly would make a large dent in a serious problem facing social media communities. If only we could muster any sort of confidence that Facebook was up to the task.