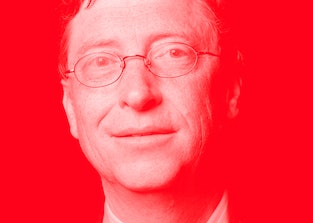 The number of mentions per day Gates received in conspiratorial takes in April.

Bill Gates' unequivocal criticism against Donald Trump's official response to the coronavirus spread has led to another outbreak: right-wing conspiracy theories. According to an analysis led by Zignal Labs and The New York Times, Gates has been the go-to target online when it comes to COVID-19 fearmongering. The Microsoft co-founder's name presently overshadows another running conspiracy theory involving 5G cellular data and the coronavirus.

Baseless opinions about Gates and COVID-19 are conjecture, sure, but they also carry the insidious potential to thwart efforts around public acceptance of vaccination. In the United States, where there are some parents who believe in debunked studies linking the measles vaccine to autism, misinformation like this can take on a dangerous face.

Tracking COVID-19 falsehoods — In 2015, Gates delivered a widely watched TED Talk about viral outbreaks and how a pandemic, not nuclear war, could undo global health and stability. That talk has made a stunning re-entry into public discussion since the COVID-19 outbreak. A disturbing portion of that social commentary on Gates' warning, however, falls into the category of conspiracy theories, especially in the more conservative hubs of the internet.

In cold numbers — At this point, the hostility toward Gates can be easily quantified. Social media, in particular, seems to be the breeding zone for these opinions. According to Zignal Labs:

No laughing matter — Falsehoods and inadequate information about public health can have devastating consequences. This much is already evidenced by the blind faith in hydroxychloroquine to treat COVID-19. Peddling rumors about Gates may stroke the egos of people like Ingraham, Kennedy, and Stone but it's a life-threatening waste of time that could be spent on collaborating and sensibly fighting this outbreak.