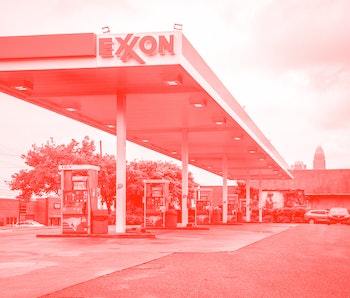 Big Oil companies like ExxonMobil and Chevron have been sponsoring newsletters in an attempt to create a positive narrative for themselves, and they’ve been spreading misinformation in the process. A joint investigation from Gizmodo and the HEATED newsletter found, for example, that 100 percent of Politico’s Morning Energy newsletters were sponsored by fossil fuel companies between October 1 and October 22.

The uptick in Big Oil sponsorships at this particular moment is no accident. Today, October 28, a group of CEOs from notable Big Oil companies will testify in front of Congress about whether or not they’ve been misleading the public about their companies’ part in climate change.

The extent of this strategy’s transparency is almost laughable. We say almost because telling the public you’re “working to reduce emissions and help advance climate solutions” while being the number-one contributor to climate change is dangerous misinformation. Dangerous in the species-level extinction sort of way.

Paltering to the end — The way these Big Oil companies are spreading misinformation is particularly sneaky because the statements they make aren’t outright lies. When ExxonMobil tells the public it’s “advancing climate solutions like carbon capture and storage to help create a lower-carbon future,” the statement itself is technically true. Exxon is, indeed, researching these solutions.

This technique is often called “paltering.” The investigation cites John Cook, a climate change communication researcher, defining paltering as a method commonly used in greenwashing, where companies attempt to distract from their polluting behavior. Like yeah, sure, Exxon is doing this research, but the company’s entire business model centers on emitting CO2 into the atmosphere.

Newsletters are ripe for the picking — Spreading climate misinformation is nothing new for Big Oil. These companies love placing misleading ads on YouTube, for example. Doing so in newsletters, though — that’s a new one.

The format of these newsletters often makes it difficult to distinguish between sponsored ads and reported content. In Axios’ Generate newsletter, ExxonMobil’s ads were formatted exactly like the newsletter’s main text.

When asked, representatives from both Axios and Politico stressed that newsletter content is totally separate from ad content. But this isn’t even the problem at hand. It’s that these notable newsletters — which together reach hundreds of thousands of subscribers — are allowing Big Oil to use their platforms to spread misleading half-truths.

Big Oil’s underhanded climate misinformation methods will face their steepest challenge ever today in front of Congress. It’s obvious from this investigation that this misinformation will continue to thrive unless changes are made by those in power.