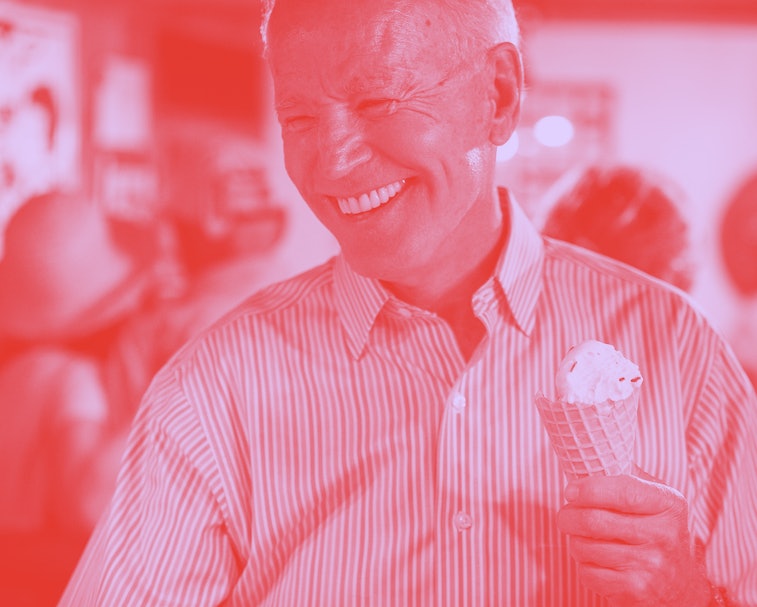 This is far from a scientific statement, but we think it’s pretty safe to say that if you asked young American voters what their three biggest concerns are going into the 2020 election, they’d say something to the effect of, “extreme wealth disparity, a deadly global pandemic, and the world teetering on the edge of ecological disaster.”

Proving to everyone once and for all just how in touch with the youth of today it is, the Biden campaign announced its partnership yesterday with the absurd celebrity shoutout app, Cameo. No need to panic about November, everyone! They’ve got this under control.

For the low, low price of $500 — Revealed on Thursday in an exclusive with The Hollywood Reporter (the obvious go-to publication for Gen Z and Millennial readers), for a limited time fans can pay celebrities like Andy Cohen ($500), Melissa Etheridge ($100), Titus Burgess ($200), Mandy Moore ($150), and Dulé Hill ($245) to lend their 30-second Cameo shoutout services with the promise that all those totally reasonably spent dollars will go directly to the Democratic nominee’s campaign fund. What a time to be alive.

The news comes only a few days after the Biden/Harris campaign announced players could soon begin sticking digital yard signs in front of their homes in Animal Crossing: New Horizons, the same video game that recently featured exploding dick fireworks. Meanwhile, most folks seem a bit more concerned about the possibility of Biden appointing Facebook higher-ups to his administration, should he win in November.

Okay, maybe we’re being a bit hard on Uncle Joe’s tactics. As cringy as some of these “youth-oriented” campaign gimmicks might be, they still aren’t as digitally clueless as Team Trump, who apparently just straight-up forgot to register KeepAmericaGreat.com, which now belongs to the Biden campaign. Which, okay, that’s pretty good. Also, let’s not forget that last month, he promised to restore net neutrality and invest in rural broadband if elected, which is genuinely important.