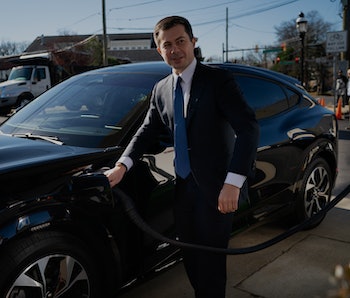 The White House is financing a new generation of electric vehicle charging standards, including the creation of a country-wide network of EV charging stations. President Biden’s goal is to utilize these standards to eventually have more than 500,000 chargers across the United States.

“Without strong standards, chargers would be less reliable, may not work for all cars, or lack common payment methods,” the White House said in a press briefing. “The new standards will ensure everyone can use the network — no matter what car you drive or which state you charge in.”

The Biden administration has been pushing relatively hard to make buying and owning an electric vehicle easier in the U.S. Last year, the administration successfully earmarked $7.5 billion to build its EV charging infrastructure and another $7 billion for the larger EV supply chain. The federal government’s EV goals are still lagging behind those set by other countries, though.

Stand by for standards — Today’s announcement is pretty bare-bones. It essentially establishes — in many more words — that the Department of Transportation and the Department of Energy will work together to develop new standards for EV charging stations.

What, exactly, those standards will entail is still a mystery, both to us and to the government itself. The Department of Transportation says the standards will “ensure a unified network of chargers with similar payment systems, pricing information, charging speeds, and more.”

This week’s renewed commitment also includes space to control standards for workers installing and maintaining EV chargers. That should ostensibly make the eventual charging network more reliable for drivers across the country.

A daunting task ahead — It’s great to hear that the federal government is taking its commitment to expanding EV access seriously. More frustrating, though, is that we’re still speaking about those commitments in abstract terms. It’s all well and good to say these agencies will be working to create and enforce new standards, but we also have no idea when those standards will be finalized or what they’ll look like. And those 500,000 promised electric vehicle chargers will be completed… when, exactly?

The U.S. has set itself a goal of having net-zero emissions by 2050. We’re really going to need to pick up the pace to hit that goal. Right now all we have are promises, and words alone won’t save the planet.

Elon Musk, meanwhile, thinks Tesla has the capacity to shift Earth’s entire energy infrastructure. At this point, his promises sound just as good as the government’s. (That’s not a compliment.)