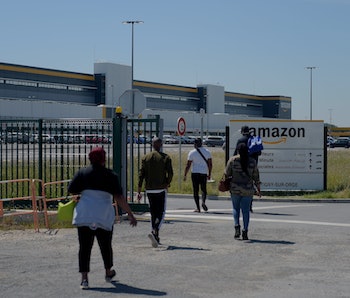 Amazon says it won't punish its warehouse workers for taking time to wash their hands or clean their workstations as the COVID-19 pandemic continues. Workers at a warehouse in Staten Island sued Amazon in early June, calling for various protections against coronavirus including additional free time during shifts to wash their hands. Multiple warehouse workers across the country have died after contracting the disease, including one at the Staten Island facility, and many more have been infected.

He said, she said — In an email sent to workers in Staten Island, Amazon says hand-washing wouldn't count as a "time off task," which is the term used for when employees are away from their workstations outside of approved breaks. The company claims it already informed workers they wouldn't be penalized for hand-washing back in March. Workers claim that was never communicated to them.

"I have continued to work as fast as I did before the outbreak of COVID-19, and I have continued to do things like rush back to my workstation following breaks or skip trips to the bathroom to wash my hands, in order to keep my rate up and to limit my TOT," said one plantiff in the lawsuit in a declaration filed on Monday.

The apparent miscommunication reflects a greater haphazard response by Amazon to the pandemic. The company has claimed that it's offering paid sick leave to workers who test positive for coronavirus, for instance, but workers have said that the company has made it difficult to actually get that time. It has also fired workers for speaking out against working conditions and threatened firings for those who violate social distancing. For a time it gave $2 per hour raises to workers, but has since discontinued those — some say prematurely.

Don't thank Amazon — Amazon's business model works in part because of the way it handles employees, keeping a close eye on hourly workers to ensure they meet exacting "quotas." Human workers are basically treated like robots with little pocket computers that beep and give them every order, like which item to retrieve and package next. Whenever a worker stops performing to its high standards, Amazon can easily replace them with someone else.

Workers, like robots, also aren't unionized, meaning the decision from Amazon to offer hand-washing breaks is a privilege that it can take away whenever it wants. If workers instead had a collective bargaining unit they could easily demand such protections rather than hope their corporate overlord gave them out of the kindness of its heart.

Amazon has worked hard to squash unionization efforts, firing a worker at the Staten Island warehouse after he tried to organize a protest against working conditions. Unionization would cost it more money that it feels it doesn't have to pay because it has dominance in e-commerce and workers have few places to go. But these workers are clearly essential, especially today, and public sentiment seems to be turning on Amazon in kind.