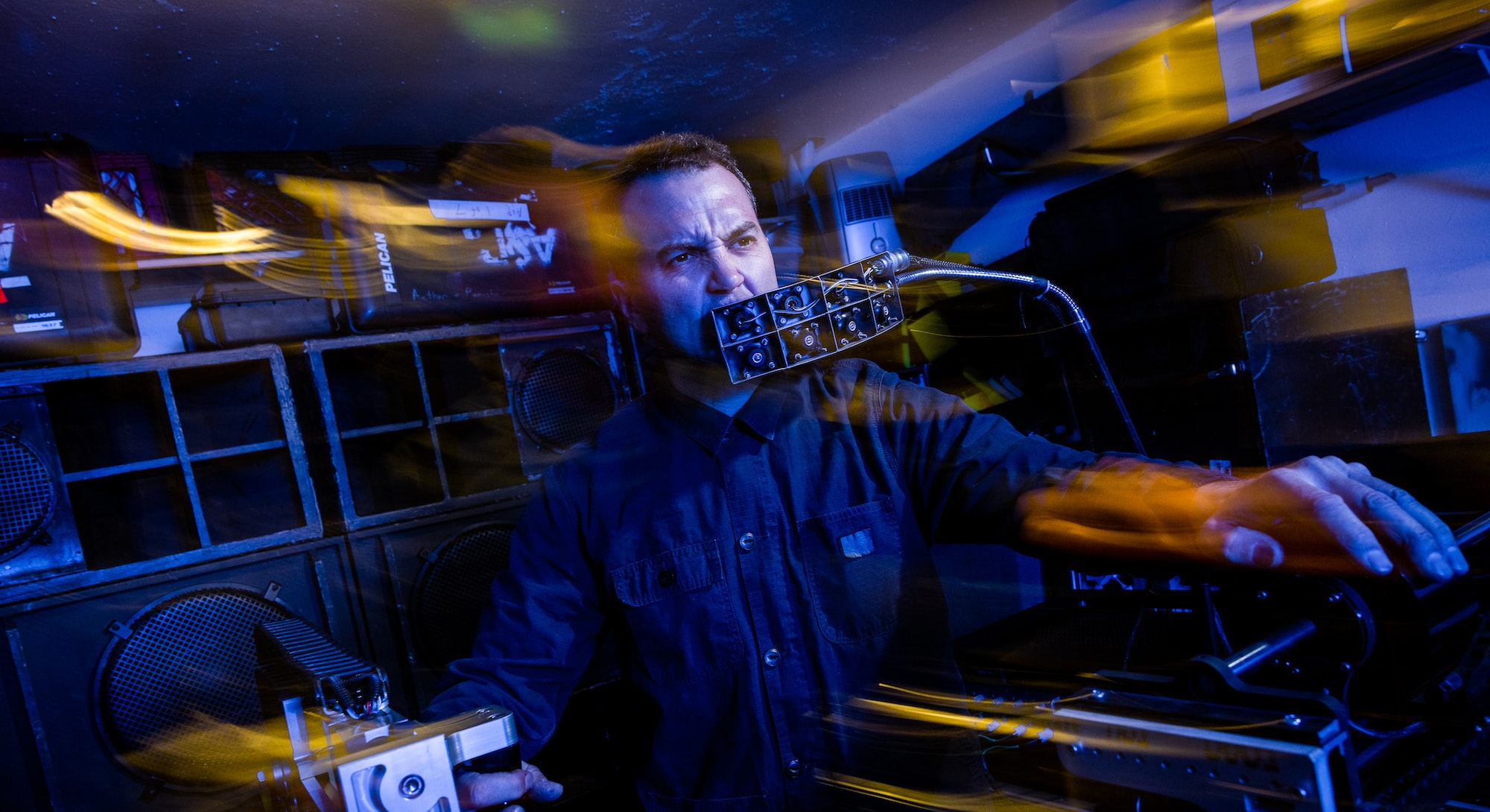 The final three shows were quickly canceled. Shone, now 44, drove his van from Portland, Ore. back home to San Diego, unaware the pandemic would end up costing him another 42 concerts that year alone.

“I went home and kind of processed where [my wife and I] were,” he recalls, noting he was lucky enough to still be able to work “a job at this lab in the health sciences department of the university.”

“A job at this lab” is something of an understatement. Since 2007, Shone has been working at the National Center for Microscopy and Imaging Research at the University of San Diego, designing and building custom complex detector instrumentation for both electron and light microscopy. (He also happens to have an MFA focusing on “electromechanical sculpture” from UCSD, not to mention a lengthy history playing in heavy metal bands.)

During his off hours, Shone turned to other pursuits: surfing, hiking, making pizza, and creating music. Lots of music. “I set myself up with a refrigerator and some beer,” he says, “and from May [2020] until October or November, I was just writing.”

Still, this is an intense-sounding album. And the subject matter is equally weighty: Shone sings, growls, and occasionally screams about eco-collapse and human cruelty. In the past, he’d often use a vocal distortion filter strapped around his trachea. He still does on Krüller, but it’s noticeably rarer here. You can hear his actual singing, lending an air of vulnerability previously absent in his work.

The album feels, in a word, desolate. When I say as much to Shone during a recent video chat, he nods his head. “In terms of ‘desolation,’ it’s just what we are living through,” he says. But Shone says he “made a real effort this time to not just throw in the towel for cynicism, because it’s such an easy thing for white people to do.”

As if a new Author & Punisher album wasn’t enough, Shone is also launching Drone Machines, a long-in-the-works company that will offer aspiring noisemakers everywhere more or less the same heavy-duty controllers he uses in his live performances.

The first three products planned are Knob, a hand-sized rotary controller made of customizable materials (like metal or stone) that spins on ball bearings, for sound modulation; Rack, comprised of two keys that slide back and forth on parallel rails and can manipulate pitch; and Ingot, a single, massive wheel that can be simultaneously spun while sliding side-to-side in order to control attack, velocity, and volume.

Over the past 18 years, Shone has built these and many other instruments, most recognizablly Rails, a forward-and-backward sliding, pistol-gripped controller programmed as a drum machine. “I’ve really had much better luck getting the sound that I want doing it myself,” says the musician, who speaks in measured tones, attempting (sometimes in vain) to break down his inventions for the casual admirer without delving too deeply into technical jargon and abstract explanations of how physical force translates into electronic sounds.

“Having a job as an engineer, I am in a position to interact with this type of equipment all day,” he says. “The machine shops that I deal with, I’m able to make that stuff at the same time I do my job. I’m asking the machinist, ‘Hey, how are parts for our lab?... And also, how are the parts for my gear going?’” (Shone’s bosses are well aware of his musical career and provide him with a flexible schedule to go out on the road.)

Drone Machines, a small shop he runs with partners Jason Begin and Adam Reed-Erickson, expects to begin shipping its gear in the spring at prices ranging from $500 to $2,000. Shone sees the instruments as a much more dynamic means of creating electronic music than simply twisting knobs and pushing buttons. “So much [EDM and industrial music] has become Pioneer decks and laptops now,” he says, “and those guys are just dying to have some sort of physical motion on stage.”

Shone does have qualms about making his instruments into a commercial venture, though.

“That’s something that I’ve always struggled with a little bit,” he confesses. “Once you make it into a company, is it fun still? Then you have to make money, and then you have to make decisions like, ‘Oh, we have to make this thing out of plastic instead of making it out of metal.’” (For the record, he’s not skimping on the materials: “A Drone Machine will ultimately outlast you,” promises the promotional one-sheet Shone emails me after our interview.)

Shone hopes to run Drone Machines as both a business and a means to build DIY industrial artist communities. “Everything’s going to be open source,” he says. “All the electronics are programmable — that’s a completely open framework.” Hypothetically, anyone with the tools, materials, and know-how will soon be able to clone Shone’s controllers. Eventually, he says, the company will foster forum-based and GitHub communities for musicians, conceptual artists, and tinkerers with their own drone machines.

It’s clear Shone doesn’t envision Drone Machines becoming the next Moog or Korg — the material requirements, along with his commitment to remaining a small, independent company, won’t allow for it. Still, Drone Machines has the potential to help usher in a new era for industrial music, one that truly lives up to the genre’s name.

Meanwhile, he has a new album to promote. At the time of our first conversation, Shone was slated to finally go back on tour overseas. Last week, however, he announced on social media that he was either canceling or postponing shows in the U.K. and Europe due to the Omicron variant surge. “Trust me, when this settles I’ll be out there,” he wrote.

In a subsequent conversation, Shone admits to some apprehension about reentering the music scene. “I haven’t been in front of people for a while. I’m coming in singing these [new] songs in a kind of naked, melodic way that I haven’t done live before,” he says. “I’m slightly terrified, to be honest.”