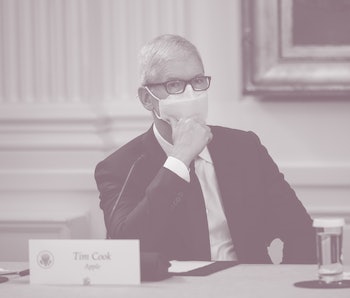 If you thought the battle royale known as Epic Games v. Apple was over and done with, think again. Attorneys general from 34 states added their voices to Epic’s current appeals process by stating that Apple does indeed stifle competition through the use of its App Store policies. That’s quite a win for Epic’s side of this story.

The attorneys general filed their remarks in the 9th U.S. Circuit Court of Appeals Thursday, as did professors and activist groups, Reuters reports.

“Apple’s conduct has harmed and is harming mobile app-developers and millions of citizens,” the states said in their statements. “Meanwhile, Apple continues to monopolize app distribution and in-app payment solutions for iPhones, stifle competition, and amass supracometitive profits within the almost trillion-dollar-a-year smartphone industry.”

Thus far, Apple has been generally successful in fending off Epic’s attacks, especially after a federal judge mostly sided with Apple in September. Epic isn’t interested in letting Apple get off so easily. Testimony from 34 states attorneys could hold significant weight as the appeals process continues.

Remind me where we left off? — This case has been running on so long now we can barely remember its details, either. What started as a relatively simple stand-off — Epic bypassed Apple’s strict payment processing rules so it wouldn’t have to give the App Store 30 percent of its in-app profits — has spiraled into a much more complex argument.

Apple quickly filed for a stay so it could postpone any real changes to its App Store policies. The judge called BS on Apple’s arguments against the stay, but Apple wasn’t ready to just give up — so it filed an appeal to the 9th Circuit Court of Appeals.

So...what now — As it stands, Apple’s appeal for a stay is still stuck in the sluggish court system. It might be a while before we hear from Apple; the company’s response to this week’s statements isn’t expected until March, Reuters reports.

Apple seems sure its appeal will stick. But the state attorneys general are presenting the appeals court with compelling arguments. With so much legal weight against the tech giant, though, its win is anything but certain.