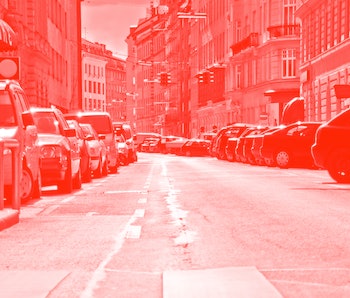 On Wednesday, new research was published in the journal Science Advances on asphalt’s contributions to air pollution, New Scientist reports. Researchers from Yale, Carnegie Mellon, and Germany’s Max Planck Institute for Chemistry found that heated asphalt releases hazardous pollutants connected to asthma and other public health issues into the air. With vehicle emissions on the decline and temperatures on the rise, asphalt has become a bigger polluter than cars in the summer heat, and the problem is only expected to get worse.

Look down to see what’s up — Researchers isolated asphalt samples and heated them between 40 and 200 degrees Celsius (104 to 392 degrees Fahrenheit). Just from 40 to 60 degrees Celsius — typical temperatures for Southern Californian asphalt on a summer’s day — emissions doubled. When hit with solar radiation, emissions jumped 300 percent.

Many of these carbon emissions go on to react with the atmosphere to form small particles called PM2.5 which you may recognize from all the mask and filter purchases you’ve made this year. These particulates can damage respiratory health, disproportionately affecting poor and BIPOC communities who are often forced to live in neighborhoods with an abundance of asphalt, lack of shade, and close proximity to highways and industrial zones. Since these communities host higher instances of respiratory issues, there’s been a stronger correlation with coronavirus cases and deaths.

The solution causes more problems — The researchers don’t go out on a limb with any policy recommendations, but they do reference “cool pavement coating” research. These coatings are meant to help reduce the heat asphalt kicks back up into urban areas, but they could also prove helpful with reducing emissions. Los Angeles has led the way with cool pavement installations and discovered a damaging trade-off. The new pavement reflects heat (instead of storing) that is then absorbed by the body, making people feel hotter even though the actual temperature is lower than usual.

For now, we can’t really tame the ground, but these coatings could work wonders on roofs where they would have less of an effect on human comfort. Maybe that will buy us enough time to make our streets a little safer.