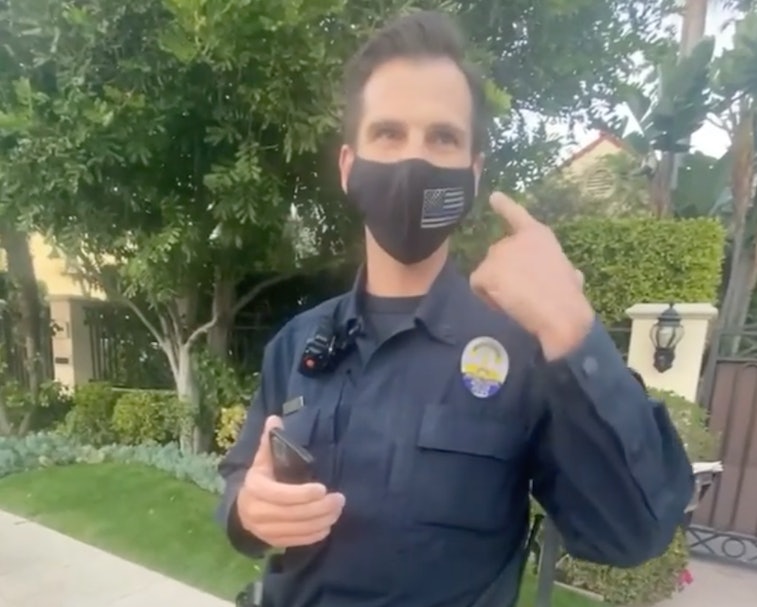 Over the past few years, cops sure have become increasingly vocal about their disdain of average citizens exercising their constitutional right to record interactions with authorities. It's almost as if many of them feel they are above the law itself, but we digress. Now, some officers appear to be trying to evade videos of them circulating on social media through a crafty — if not exactly airtight — strategy: playing copyrighted music loudly and for long enough to be flagged by automatic censoring software on apps like Instagram.

In a recent upload from Sennett Devermont, an activist behind the @mrcheckpoint_ and @alwaysfilmthepolice Instagram accounts, a routine interaction with a Beverly Hills police officer regarding a FOIA (Freedom of Information Act) request veered off the rails when the cop realized their conversation was being live-streamed. Within a few moments, Sgt. Billy Fair proceeded to queue up Sublime's "Santeria" (of all songs) and began playing it at a high volume from behind the precinct counter's plexiglass barrier.

Multiple examples of police playing music on video — "Sir, you're putting on music while I'm trying to talk to you. Can you turn that off? It's a little ridiculous," Devermont can be heard saying, followed by a sizable pause from Sgt. Fair. "I'm just trying to see how many people are watching this. Since you didn't answer my simple question, I tried to find it myself," the officer finally replies from behind a Blue Lives Matter face mask, alluding to their discussion from a few moments earlier regarding how many people might be watching the livestream.

A separate encounter with the same officer plays within the same edited clip near what appears to be an active crime scene. "What — why are you playing music?" repeats Devermont, to which Sgt. Fair teasingly asks, "What? I can't hear you."

Sort of smart, but definitely unreliable — According to a rundown by Vice, Devermont is also in possession of similar footage from past interactions with law enforcement, pointing towards a trend for some officers to try and disrupt livestreams the same way. Theoretically, the strategy could make the videos subject to content flagging, or even account suspensions and bans. That said, Instagram's content monitoring algorithms are inconsistent at best, and every upload of Devermont's encounters remain on the social media app.

If nothing else, these videos of pissed-off cops deploying 2021's version of "La-la-la, I can't hear you!" are as ridiculous as they are unsettling. In most cases, filming on-duty police is an American right protected by the First Amendment. Law enforcement is more aware of this than most citizens, so people like Sgt. Fair and others know exactly what they are doing when they start playing music. The question is whether these are the acts of a few industrious police, or a recommended policy handed down from on high.

Take all this as a polite reminder that it is absolutely legal to film cops in situations like the ones in these videos, and you should feel free to do so if inclined. There are even apps to help you do just that, so don't let Sublime's "Santeria" — or any other tunes, even ones you hate — dissuade you.