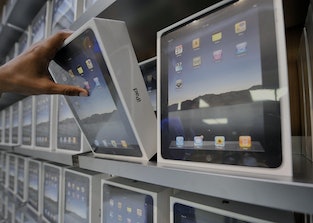 The estimated worth of the iPads used as collateral.

Thomas Moyer, Head of Global Security at Apple, has been indicted for allegedly trading iPads for concealed-carry gun permits for Apple’s security team, according to documents made public Monday morning. Yeah, Apple’s top security expert was apparently haggling with cops and using iPads as a bargaining tool.

The office of the Santa Clara District Attorney made an announcement about the charges yesterday about the charges as well. The grand jury investigation found that Undersheriff Rick Sung and Captain James Jensen, both of whom work in Santa Clara County, kept concealed carry permits from real applicants so they could use them for bribes.

And one of the people taking advantage of those bribes: Thomas Moyer. Moyer has been Apple’s security chief since 2013 and has worked for the company since 2006. Apparently that long employment history didn’t exactly make him loyal to the company — well, at least not in the way most of us would think of as loyalty.

Did you say… iPads? — This whole situation is wild. Besides the obvious — one of Apple’s executives was bribing cops?! — there’s also the use of iPads as bargaining tools. Moyer allegedly promised “200 iPads worth close to $70,000” in a trade for four approved concealed-carry licenses.

iPads are great, and they’ve really taken off as an everyday tool in recent years, but seeing them used to strike illicit deals is a new one. It's not a use case we expect to see showing up on Apple's website any time soon. Moreover, these aren’t PlayStation 5 consoles or other hard-to-come-by devices we’re talking about — you can walk into just about any electronics retailer or Apple Store to purchase as many as you please.

No word from Apple yet — Apple has thus far been characteristically quiet about Moyer’s indictment. That’s not shocking at all, given the legal minefield the company will be wading into with this one. It doesn’t exactly look good that its top security executive has been doing something so, erm, insecure... and illegal. Also, it's not exactly obliged to comment.

Here’s the other strange thing: the fees required to process a concealed-carry license rarely amount to more than $400 each. But the District Attorney’s office also notes that obtaining them requires applicants to prove they have “good cause” and good moral character. It’s really those protections that Moyer hoped to get around, as well as skipping in line, essentially.

The investigation into Sung and Jensen’s activities has been ongoing for more than two years now — Moyer’s part in all of this allegedly took place in August 2019. He and the other defendants will be arraigned on January 11, 2021 in San Jose, California.