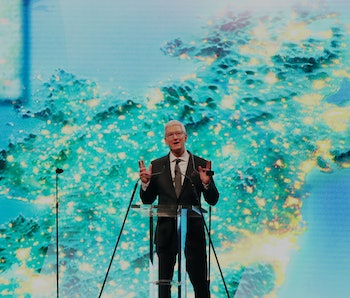 Apple’s App Store policies are officially under investigation by antitrust regulators in the European Union, the European Commission announced today in a press release.

“Apple sets the rules for the distribution of apps to users of iPhones and iPads,” said Margrethe Vestager, executive vice president of the European Commission. “It appears that Apple obtained a ‘gatekeeper’ role when it comes to the distribution of apps and content to users of Apple's popular devices. We need to ensure that Apple's rules do not distort competition.”

These investigations could change the way Apple operates in the EU forever. But they could also fall flat if the Commission doesn’t find any foul play on Apple’s part.

“It’s disappointing the European Commission is advancing baseless complaints from a handful of companies that want a free ride, and don’t want to play by the same rules as everyone else,” Apple said in a statement. “We don’t think that’s right — we want to maintain a level playing field where anyone with determination and a great idea can succeed.”

Spotify tops the complaint list — This investigation has been in the making for more than a year now, thanks mostly to Spotify. The company announced in March 2019 that it had filed a complaint with the European Commission against how Apple uses its policies to “stifle innovation.”

A big part of Spotify’s complaint focuses on the 30 percent fee Apple charges for every purchase made in-app. That fee is even charged when an Apple user, for instance, upgrades from Spotify’s free tier to its paid, Premium subscription. Spotify argues it shouldn't have to pay Apple when all it's doing is serving as a conduit for the app download. Apple's since retaliated by claiming Spotify barely pays it any fees anyway.

The other major complaint that led to the investigation was filed in March 2020 by “an e-book / audiobook distributor,” according to the Commission's press release. That company has not made its involvement public.

What’s next? — For now, a whole lot of waiting, really. The investigation will continue as planned behind closed doors, and we’ll hear about it when the European Commission has made some decisions.

There’s actually another parallel case being opened today about Apple's alleged refusal to allow third-party access to Apple Pay. We have far less information about that one, except that it centers on Apple’s exclusive access to the NFC chip in its iOS devices. But we can bet Apple will argue there, too, that it's doing nothing wrong.