“Apple TV+ is off to a rousing start,” but its revenue “was immaterial to our results.”

Tim Cook on an earnings call. 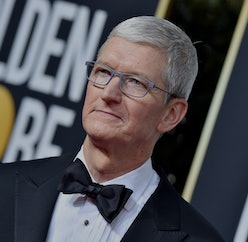 During an earnings call on Tuesday, Apple CEO Tim Cook announced a record-breaking revenue for the company over a holiday period. Apple’s services (App Store, Apple Music, etc.) accounted for a $12.72 billion chunk of the $91.82 billion total revenue during Q1 2020. Cook acknowledged how Apple TV+ didn’t account for much of this in the last quarter of 2019, but he’s still enthusiastic about the streaming service’s future.

“Apple TV+ is off to a rousing start” — Despite the initial scathing critiques of its very expensive shows, Apple TV+ is winning hearts and minds. Awards season bestowed The Morning Show with Golden Globe nominations, a SAG award, and a Critics Choice Award. The show has only a 61 percent critic score on Rotten Tomatoes while audiences average a 94 percent score. Other shows like See and Truth Be Told have even more conflicting critic and audience scores while titles like Servant proved to be more universally liked.

People just really like Apple TV+ shows. A Parrot Analytics list of the top 10 streaming original premieres in the U.S. was shared with Business Insider. Of these fourth quarter premieres, six shows launched on Apple TV+, but the top spots went to Netflix’s The Witcher and Disney+'s The Mandalorian.

But what about cash flow? — Everyone entering the streaming wars is doing their best to compete with Netflix. According to Ampere Analysis data, Netflix had 61.3 million U.S. subscribers in the last quarter of 2019. Apple TV+ managed to get 33.6 million subscribers, but Ampere noted that “the vast majority” of these users received a free year of the subscription.

Companies are doing everything in their power to boost numbers out the gate. Disney+ made a deal with Verizon that won them 8 million subscribers at launch. NBC Universal’s Peacock recently announced that Xfinity and Cox customers (21 million) will get the premium, ad-supported tier for free instead of $5. Disney and Apple, however, have a one-year clock running on their promotions, so we’ll find out if any of these subscribers stick around once they actually have to pay.