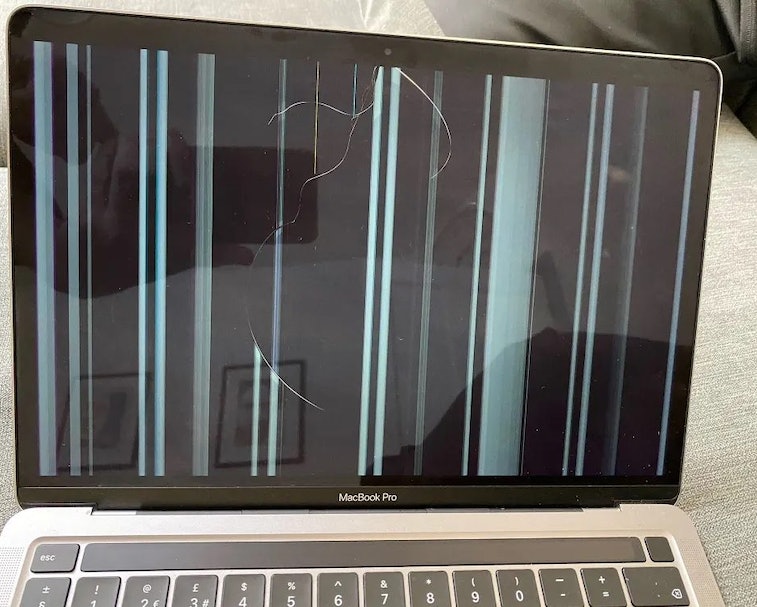 Well, that was fast... even for an M1 processor. According to recent reports, Apple might be heading into yet another legal entanglement, this time over its newest line of MacBooks featuring the company’s flagship CPU / GPU chip. The law firm Migliaccio & Rathod LLP is soliciting contact details for any owners of M1 MacBooks and MacBook Airs whose laptops have suffered major screen cracks for no apparent reason, in anticipation of what could become a major class-action lawsuit following numerous consumer complaints on Apple Support Communities and Reddit threads.

According to some MacBook owners, their computers inexplicably developed large screen cracks and lines of dead pixels following minor, routine usage. Sometimes, a MacBook customer would discover the damage seemingly out of nowhere upon reopening their device. While 9to5 Mac reports Apple has replaced at least some of these computers free of charge, the vast majority of users with the problem have been charged for repairs.

Lawyers seeking evidence from customers — “Many suspect that the display is simply not sturdy enough to withstand the normal pressures of opening, closing, or adjusting its position, an issue for which Apple has provided zero forewarning,” Migliaccio & Rathod said in a statement. “Whatever the case, users are left with little choice but to spend upwards of $600.00 to have their display repaired, with no guarantee that the screen crack defect won’t reoccur at a later date.”

Migliaccio & Rathod LLP encourages anyone who has experienced similar issues with their M1 machines to contact them via email at info@classlawdc.com or by calling (202) 470-3520.

Add it to the pile of legal problems — If the class-action suit moves forward, it would become yet another legal headache for the Big Tech giant as it faces increasing criticism and scrutiny for a variety of issues. The most recent, and potentially most impactful, surrounds the company’s announcement of a new photo identification hashing system Apple claims is meant to help combat child sex abuse material distribution.

Critics argue the implementation of the new AI software could portend serious privacy concerns and violations, without actually accomplishing much of its stated goals. So far, the company has held off on rolling out the update, which is probably sensible, as it’s otherwise likely that legal challenges will start the moment the feature is implemented.