Apple is now worth over $2 trillion, proving walled gardens work 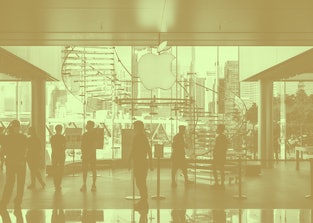 Apple's market capitalization as of this week.

Despite increased governmental scrutiny, a deadly pandemic, and providing comparatively few new innovations in its product lines since the Airpods, Apple has still managed to double its market value in less than two years, becoming the first American corporation valued at over $2 trillion.

While all those factors should have otherwise hobbled any company, Apple’s meteoric rise in value lends some real credence to the benefit of aggressively vertically-integrating nearly every facet of consumers’ modern communication and entertainment needs while also working hard at keeping competitors at bay. Paying virtually nothing in taxes probably helps, too.

A pandemic payoff— Apple only passed the then-massive $1 trillion value marker back in 2018, so to double that within 24 months is either immensely impressive or horribly troubling, depending on your view of things. What’s especially jaw-dropping about this development is that, as The New York Times notes, the majority of that newfound trillion came only in the past 21 weeks, right around the beginning of the global pandemic, and while worldwide markets were otherwise shrinking faster than ever before in history.

By locking customers into a timeline that pressures them to purchase new product models every two or so years while requiring digital subscriptions for services like Apple Music, AppleCare, iCloud storage, and its News app, Apple can ensure steady profit streams even while only offering incremental hardware updates for years on end.

One of the other keys to Apple’s success is its strategy of stock buybacks, which allows a company to drastically lower the number of available shares in its company, thus increasing the value for each individual stockholder. Since the shares increase exorbitantly in price through this nifty trick, it ends up benefiting the largest shareholders and the company’s own executives. This only revved up following the Trump administration’s 2017 tax law that ended up saving Apple $43 billion in taxes after repurchasing shares previously held abroad.

Apple will keep on growing— There doesn’t seem to be any indication that Apple’s profits will slow down anytime soon, either. Most expect the company to begin rolling out 5G iPhones by the end of this year, and with the forthcoming iPhones expected to have more serious hardware and cosmetic changes than the last generation, it's guaranteed to sell heaps of them. With wearables like the Apple Watch and AirPods in the mix, too, there's plenty of revenue to be had from hardware, even as the company tries to grow the share of its revenue it receives from services.

Could Apple add another trillion in a year or two? It's certainly proven it's not inconceivable. It also means that if Epic Games, which is currently locked in a battle with Apple over its payment rules for its App Store, thinks it can strongarm Apple into concessions using financial threats, it's barking up the wrong tree.