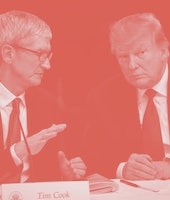 Donald Trump's latest deal with China is working in Apple's favor — to an extent. According to Business Insider, Apple dodged a 15 percent tariff on its main products like the iPhone, iPad, and Macbook after Trump postponed tariffs with China. One of the company’s major assembly plants is located in Zhengzhou.

Trump’s just fixing a problem he created — Let’s keep in mind that the on again off again threat of a trade war has been one of the core policies of Trump’s presidency and he uses it as a form of economic brinkmanship to gain leverage in other conversations.

How this helps Apple — On the surface, 15 percent may not sound like a lot but it narrowly saved Apple from getting wrecked in the market. Apple analyst Daniel Ives told Business Insider that the tariffs would have been major bad news for Apple if they were applied, as they would have shot the iPhone's price up by $120 to $150. This could have consequently lowered demand for the device by 6 to 8 percent — a huge blow for the tech giant.

According to Ives, some 350 million of the 900 million existing iPhones need an upgrade. Getting hit with tariffs at this moment would be a major detriment to Apple since the company plans to launch its first 5G-enabled handsets.

Tim and Trump — It bears mentioning here that CEO Tim Cook and President Trump enjoy a rather peculiar faux-friendship. Over the past year, Cook has met with the president several times, including having dinner with him and touring a Texas assembly plant for Apple’s Mac Pro. While Cook doesn't openly discuss their politics, at the end of the day it looks like frequently fraternizing with Trump is helping Apple. After all, the president did previously say he was “looking at” saving the company from major tariffs.