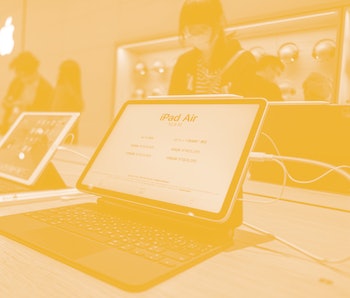 Apple's head of global security, Thomas Moyer, was recently indicted for bribery by a grand jury in the county of Santa Clara, California. Moyer was accused of bribing the Santa County Sheriff's office with 200 iPads — worth at least $70,000 — in order to access concealed-carry permits for certain Apple officials. The reports surrounding the incident pointed to four Apple employees as part of the alleged exchange.

Initially, it was expected that Apple would opt to go its characteristically silent and diplomatic way, and stay out of the legal chaos that has since unfolded. But Ars Technica reports Apple has actually defended Moyer. A spokesperson for Apple said in a press statement, "We expect all of our employees to conduct themselves with integrity. After learning of the allegations, we conducted a thorough internal investigation and found no wrongdoing."

How did we get here? — Depending on the state you're in, the local law will decide just how likely you are (or aren't) able to get a permit to carry concealed weapons. As it stands, California law gives this power to sheriffs depending on the country they're in.

In Moyer's case, the Apple security chief isn't alone in this legal quagmire. Two members of Santa Clara County Sheriff Laurie Smith's office have also been indicted. For Smith, meanwhile, this Moyer debacle is yet another troubling report against her as she stands accused of deliberately pulling permits unless she was reportedly offered favors.

If you're curious to learn more about Smith's ethically dubious re-election campaign, you can read this NBC Bay Area investigation.

What happens now? — In convicted, the defendants in the case could serve time in jail. That sentence could take some time to arrive, if at all. It's an odd scenario with many lingering questions. A concealed-carry license runs about anywhere between $250 and $400, which makes Moyer's alleged bribery quizzical. Why would the Apple security head need to circumvent the conventional route?

Normally, licenses are handed out after the applicant can demonstrate to the relevant authorities that they have adequate reason to need a firearm plus they're able to demonstrate sound character which wouldn't jeopardize another individual's safety.

By allegedly seeking to bypass official channels, Moyer has painted a troublesome image of himself. Or rather, the allegations of his conduct have. Apple's defense of him, meanwhile, only serves to muddy the waters, because if something was suspect, you can bet the company would be falling over itself to distance itself from him. We get the feeling we haven't heard the last of this sordid tale.