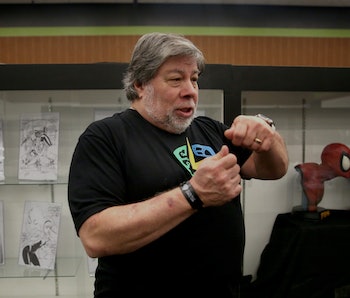 Apple co-founder Steve Wozniak has taken a direct jab at the company he co-founded by endorsing the right-to-repair movement, which seeks to give consumers the ability to repair their own devices with instruction manuals and replacement parts.

Wozniak made the comments in a video on Cameo, responding to a request from a proponent of the movement who is hoping to get right-to-repair passed into law in the United States.

Engineer’s mindset — In the video, he says that Apple potentially never would have succeeded had it not been for the open nature of its first hit computer, the Apple II. Released in 1977, it represented one of the first highly successful mass-produced computers. Wozniak argues it was popular in part because it shipped with schematics and designs, so hobbyists could tinker and attach their own peripherals.

"We wouldn't have had an Apple had I not grown up in a very open technology world," he said. "So why stop them? Why stop the self-repair community?" he asked. "How was Apple hurt by the openness of the Apple II?"

Wozniak stepped down from any operational role at Apple in 1985, but said last year that he is still technically an employee, collecting a salary of $50 per week as a symbolic gesture. But the engineer has never been shy to criticize Apple, always letting the engineer inside guide him. He attributes the open nature of early computing as the way he learned how to build computers in the first place, and locking down hardware will make it difficult for the next generation of engineers.

During his time at Apple, Wozniak believed in making devices expandable, while his co-founder Steve Jobs believed in marketing sleek products that just work.

Apple’s fight — Apple has long fought against the right-to-repair movement, arguing that consumers shouldn’t be allowed to repair devices because they could hurt themselves or break their devices. The company controls the repair market for its devices, only allowing repairs to be carried out by authorized technicians using proprietary machines.

Critics think Apple is motivated by a desire for consumers to purchase new devices rather than keep the ones they already own by extending their lifespan.

The resistance from Apple could also be because it has succeeded by tightly controlling every aspect of its products to create the most optimized experience. In court hearings for the Apple v. Epic Games case, the company has argued security is paramount and can only be achieved by locking down its operating system from unauthorized software.

Wozniak doesn’t seem to buy into that argument. “Is it your computer [as the customer]? or is it some company’s computer?” Wozniak said in the Cameo. “Think about that. It’s time to start doing the right thing.”

The European Union has been pushing right-to-repair legislation in hopes that it could help the bloc reach its goal of producing zero emissions by 2050. Apple offers a recycling program for old devices, but extending the lifespan of existing products is more eco-friendly than stripping products for parts. The Biden administration may push a similar law.