“Owning an iPhone makes you a digital slave of Apple.” 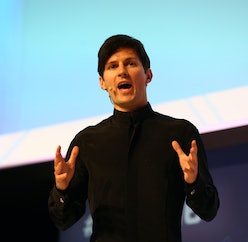 Privacy-focused messaging app Telegram is a huge hit on the iPhone — but apparently, that love doesn’t go both ways. CEO and co-founder Pavel Durov posted a lengthy comment on his Telegram page in response to a recent New York Times report detailing Apple’s data privacy in China.

“Every time I have to use an iPhone to test our iOS app I feel like I’m thrown back into the Middle Ages,” Durov writes. “The iPhone’s 60Hz displays can’t compete with the 120Hz displays of modern Android phones that support much smoother animations.”

Oof. Go ahead and tell us how you really feel, why don’t you.

That’s not even the most hard-hitting of Durov’s comments, though. He goes on to call the company’s hardware “overpriced” and “obsolete.” He also takes a hit at Apple’s ecosystem as a whole, which he says makes customers into “slaves.”

Durov isn’t the biggest name in tech, but his voice is powerful, and his comments will no doubt be heard by important people in Big Tech. Telegram has always been a huge advocate for future-forward tech that focuses on privacy, so its CEO’s hatred of Apple looms large in that context.

Wait, what’s he talking about? — Durov comes across in his post as someone who’s been stewing about Apple for ages. But there was one piece in particular that set him off — a lengthy report from The New York Times about Apple’s relationship with the Chinese government.

According to that report, Apple has complied with China’s requests for complete control over its data centers. Facing intense new data laws in China, Apple made the choice to hand over legal ownership of customers’ data to a company called Guizhou-Cloud Big Data (GCBD).

Apple had the choice to either leave China — one of its biggest sources of business — or comply. Choosing the latter saved Apple’s business but now leaves customer data up to the whims of the Chinese government.

“It’s no wonder that Apple’s totalitarian approach is so appreciated by the Communist Party of China, which — thanks to Apple — now has complete control over the apps and data of all its citizens who rely on iPhones,” Durov writes.

The walled garden — Durov’s comments feel particularly pointed given the ongoing trial between Epic Games and Apple. At the heart of that case is the exact dilemma Durov speaks to in his post: that Apple locks customers into its ecosystem with incentives to never leave.

This “walled garden,” as Epic’s lawyer has called it, is made very inviting to potential users with Apple-specific features like iMessage and iCloud. Once you’ve entered the garden, it’s difficult to leave. Hence Durov’s “slave” comment. He worries about the implications of handing over user data to China — data that Apple has essentially locked into its garden with iCloud.

“It is sad, but not surprising: big tech companies often choose profits over freedoms,” Durov writes.