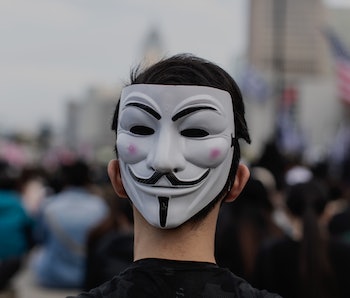 Hacktivist collective Anonymous is back, this time to speak up about the continued unrest following the racist murder of George Floyd at the hands of police. Anonymous uploaded an approximately four-minute video entitled “Anonymous Message To The Minneapolis Police Department” to the group’s Facebook page on Thursday evening; the video was also sent directly to the Minneapolis Police Department. Following the video's publication, the MPD website went down over the weekend, though Anonymous has not explicitly taken credit for an attack on the site.

The video features a person in a Guy Fawkes mask speaking in a computer-deepened voice as lines of green code are projected across the screen — both now recognizable as staples of the group’s productions. The video speaks to the continued, widespread police brutality across the United States and cites the Minneapolis Police Department as “one of the worst” in the country.

Anonymous ends the video with an ultimatum: bring criminal charges against all of the officers involved in George Floyd’s death, or we will bring to light many more horrifying violations by the Minneapolis Police Department.

At Anonymous’ peak, the group’s calls to actions stood out amongst a backdrop of ignorant silence. In 2020, though, Anonymous’ once-disruptive actions come across as just another blip. We’ve moved past the intrigue of faceless threats; we’re ready now for precise, unobstructed action against oppressors.

Who is Anonymous? — We truly have no idea, thanks to the group’s continued dedication to its anonymity. We don’t know how far the group reaches at this point; nor do we have any idea whether the disparate parts of the organization even work together on its projects.

Anonymous rose to fame in 2003 — essentially an eternity ago, in internet time. The group began on everyone’s favorite far-right incubator 4chan, which gives you a sense of its scruples. Most of the group’s early activities were limited to trolling on 4chan and related message boards.

Through the late 2000s and early 2010s, Anonymous rose as a supposed voice of the people, organizing cyberprotests around topics ranging from the Church of Scientology to Occupy Wall Street to the Black Lives Matter movement. In recent years the group has been much, much quieter.

We’ve outgrown Anonymous — There’s a reason Anonymous has all but faded from cultural consciousness: we are wary of misinformation. The rise of so-called “fake news” has rightfully kept the internet on its toes when it comes to unverified claims, and that extends to activism. Where Anonymous’ high-level trolling once seemed groundbreaking, it now falls flat amid the many, many activist groups fighting for the same purposes.

In the face of our ongoing misinformation crisis, Anonymous’ continued anonymity makes it very difficult to judge when the group is even responsible for activist efforts. For example: when the Minnesota Police Department’s website went Saturday night, the group did not take official credit for the takedown — but an Anonymous-related Twitter account retweeted someone else’s claim that the group was behind the hack.

With misinformation more prevalent than ever before, Anonymous just doesn’t fit into the internet as well as it once did. Its services no longer feel disruptive in a productive way; they mostly feel obscure and ineffective. We’d much rather rely on online activists who aren’t hiding behind masks.