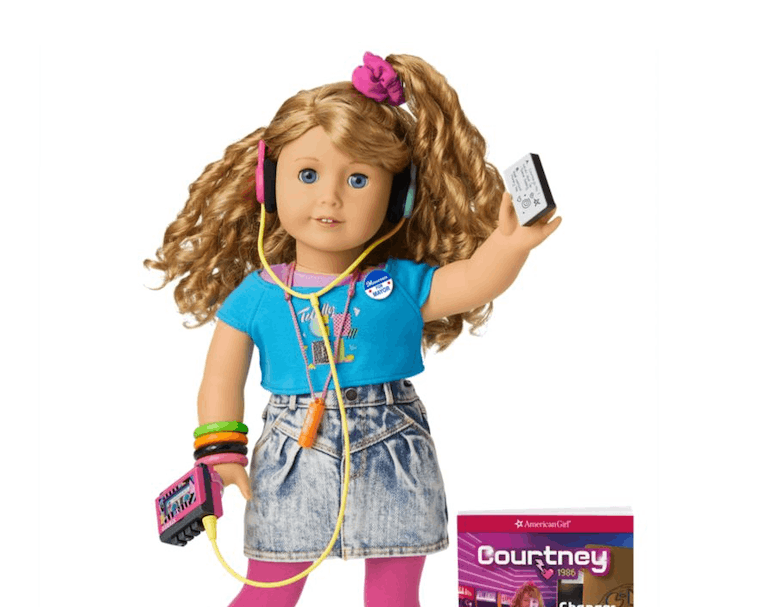 American Girl has launched its first gamer doll named Courtney Moore. The company has introduced Courtney as a quintessential Californian girl from the 1980s, straight out of the San Fernando Valley. So, think Californian suburbia with some arcade flare as Courtney "loves playing videos." American Girl's move to introduce a gamer-friendly doll, accompanied by photos of her near a Pacman machine, is bound to make its young consumer crowd happy.

Courtney's background is worth checking out, too. The self-reliant Courtney has a stepsister named Tina and they both "don't always get along." American Girl also notes that Courtney's mother is aspiring to represent locals as a potential mayor and "things are changing at home." She's got a whole set of accessories to match the backstory, including a fancy walkman.

What else does Courtney have? — Courtney, who stands at 18 inches, is a blue-eyed doll with dirty blond hair and bangs. The doll has a pin on saying "Maureen for Mayor," presumably related to her mother running for public office. She wears a scrunchie, headphones, multi-colored bracelets, pink tights, and white shoes. In typical 1980s fashion, Courtney naturally wears a faded jean skirt and a graphic tee. She arrives in a box with Pac-man proudly displayed in an arcade.

Although Courtney's based in the neon-bright, big-hair world of the 1980s, her character and the cultural message she gives off is pertinent even now for little kids who want a blend of American Girl and gaming. Jamie Cygielman, the general manager of American Girl, said in a press release, "The 80s are back, and we’re thrilled to celebrate this pop culture-defining decade with girls and their parents through Courtney."

"For nearly 35 years, American Girl’s historical characters have helped to bridge the past and present, while providing inspiring role models through immersive storytelling and imaginative play," Cygielman added. "Likewise, Courtney’s story illustrates how to create positive change by standing up to fear, finding strength in every challenge, and developing empathy for others — qualities that are timeless and more important than ever."

Cygielman says the company is also teaming up with Girls Who Code "to help change the game when it comes to influencing female leadership in the fields of computer science and technology."