“Someone paid me like 50 cents to recall the most painful memory of my life.” 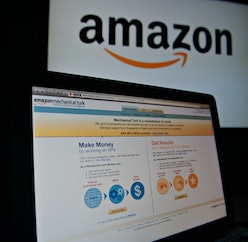 Amazon Web Services’ Mechanical Turk launched in 2005 as the arguable OG of the modern gig economy. Often for less change than you could find in your couch, workers perform menial tasks computers aren’t smart enough to do. Starting in roughly 2007, publications have become increasingly critical of Mechanical Turk.

At first, this criticism mostly focused on the absurdly low task wages, but new surveys conducted by Gizmodo have revealed a worrying psychological component of this work. As more companies seek these workers to train content moderation AI and the scientific community take greater stock in this… turkforce, the emotional cost isn’t worth 97 cents an hour.

The surveys — Gizmodo received approximately 1,100 responses to two surveys posed to Mechanical Turk workers. The responses confirmed much of what we already know: the pay is low, competition is high, part-timers are more satisfied, and the businesses/organizations (“requesters”) can easily refuse to pay, which tanks “turker” ratings. In July 2019, Amazon began displaying requester stats to help turkers avoid scams and rating-killing rejections, but it’s still not interested in enforcing a minimum wage on the platform.

Pennies for your sanity —The most interesting responses reported involved the graphic nature of training content moderation AI. Eleven percent of respondents to the second survey claimed to have seen graphic media ranging from beheadings to child pornography. Requesters are required to place a disclaimer on any graphic tasks, but the blanket statement hardly differentiates between a video with some nudity and images of mutilated faces from self-inflicted gunshot wounds. Tasks involving these images often pay just a quarter.

Personal information is another sticking point for turkers. In some cases, they have access to other people’s social security numbers while in others, photos or other sensitive information is requested. For scientific studies, including medical and psychological, researchers also turn to platforms like Mechanical Turk for (possibly inaccurate) surveys which often require intimate anecdotes. One person wrote: “Someone paid me like 50 cents to recall the most painful memory of my life. It fucked me up for the entire day.” These academic surveys were the source of 12 percent of respondents' discomfort and clearly had intense psychological effects.

We’ve had about 15 years of shrugging off this labor force that’s designed to feel like a machine. But the historical Mechanical Turk gives us the lesson we need to hear: there are humans behind that machine.