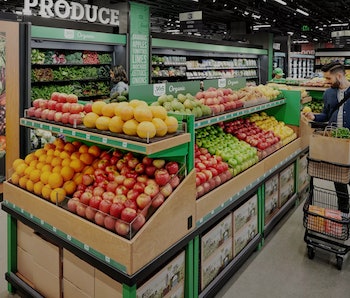 Amazon bought into the grocery market with its purchase of Whole Foods in 2017 — but now the tech giant wants to make the grocery-shopping experience more impersonal than ever. Today Amazon is opening its first cashierless grocery store, a full-sized, 10,000-square-foot space in Seattle’s Capitol Hill neighborhood. The Amazon Go Grocery store will be fully stocked with more than 5,000 products, as well as with cameras and sensors to ensure transactions are smooth.

With the opening of its first full grocery store, Amazon is taking its commitment to the grocery industry to new heights. If the store does well, it could have a serious impact on the industry.

This has been a long time coming — Amazon has been working on its foray into the grocery industry for a long time now. For years before its purchase of Whole Foods, Amazon had been toying with business models to create affordable grocery delivery for customers.

Amazon offers grocery delivery for Prime customers in some areas, but the service has never been full-featured. The original prototype for an Amazon grocery store fell by the wayside in 2015 after CEO Jeff Bezos reportedly took issue with some of the store’s projected mechanics.

Will the technology take off? — Amazon Go Grocery’s leap of faith lies in its lack of cashiers. The only staff working in the store either greet customers at the door or check IDs in the store’s alcohol section. The technology undergirding the store’s day-to-day operations is tricky — especially when it comes to unpackaged items like produce — so Amazon doesn’t think it will be expanding the concept for the time being.

“There’s no plans to put this in a Whole Foods, for now,” said Amazon Go’s vice president, Dilip Kumar. “For now, what we are focused on is this concept and see what customers think of it.”

Amazon wants to swallow every industry — Amazon’s business model is predictable because it works: offer low prices on popular items and wait for the cash to roll in. This model has in the past allowed Amazon to dominate markets like book-buying and cloud computing. Amazon has — for better or for worse — forever changed the landscape of every industry it’s entered.

Amazon is making a big bet by opening this store. Only time will tell if it pays off.