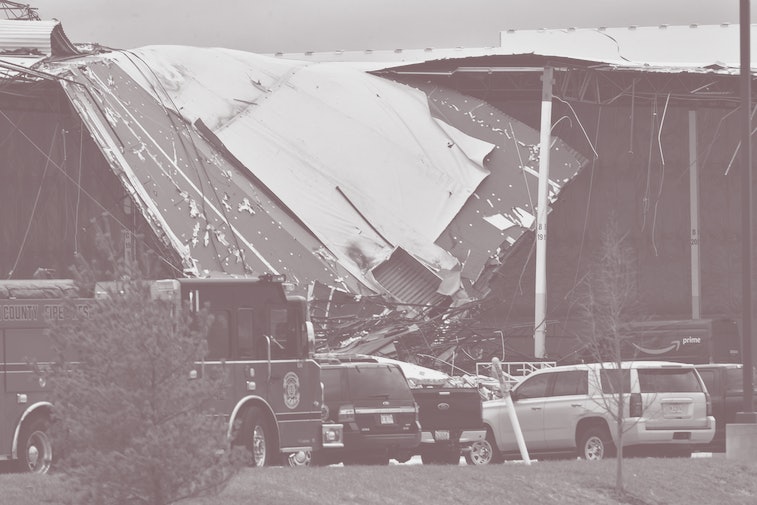 An Amazon warehouse collapsed in on itself Friday night in Edwardsville, Illinois, killing six employees and injuring many others. Though nature was the cause of the collapse — a bunch of tornadoes tore through the area — Amazon’s culpability in the tragedy is still very much up for debate. Early employee testimonies point to troubling warehouse policies that certainly could’ve contributed to the outcome.

The tragedy has brought to light concerns about a warehouse policy that forbids workers from using their phones at work. They’re not even allowed to carry them onto the factory floor; phones must be left either in the employee’s car or in one of the facilities lockers. Metal detectors at the door ensure the policy is followed. While this has policy has been relaxed in recent years, Bloomberg reports that Amazon is hoping to reinstate it in full soon.

The obvious problem with this policy is that it purposefully cuts warehouse employees off from the rest of the world while they’re at work. Deadly tornadoes on the way? Guess they’ll find out when the building they’re working in is torn to shreds.

It gets worse, though. At least one of the workers who died in the collapse was explicitly told not to leave the building as the tornadoes approached, according to his girlfriend.

Amazon’s place in the blame game — Amazon is not at fault for the series of tornadoes that battered the U.S. this weekend. (Unless, of course, we’re talking about the company’s overwhelming environmental impact, in which case… well, that’s a larger conversation for another day.) But the company’s strict warehouse rules have workers worried about how similar disasters will be handled in the future.

The no-phones rule has been relaxed somewhat during the pandemic, but Amazon is ready to re-institute it at full blast. Workers are concerned that, with no access to emergency alerts or communications with loved ones, they won’t know just how bad things are until the roof falls in over their heads.

“After these deaths, there is no way in hell I am relying on Amazon to keep me safe,” one worker told Bloomberg. “If they institute the no cell phone policy, I am resigning.

No escape — More concerning still is the allegation that warehouse workers were told not to leave the facility despite the life-threatening storm. Larry Virden, one of the workers who died in the collapse, reportedly texted his long-time girlfriend about 20 minutes before the tornado touched down.

“I got text messages from him. He always tells me when he is filling up the Amazon truck when he is getting ready to go back…I was like, ‘OK, I love you,’” she told the New York Post. “He’s like, ‘well Amazon won’t let me leave until after the storm blows over.’”

Virden’s girlfriend says she doesn’t blame Amazon for his death, but she can’t help but wonder how the situation would’ve played out if he’d been allowed to leave. It would’ve taken him just 13 minutes to drive home. “But it’s the what-if situation,” she said. “What if they would have let him leave? He could have made it home.”

Profits first, always — Amazon says it did everything possible to get workers into a designated shelter area when the storm hit. The company is also donating $1 million to the Edwardsville Community Foundation for recovery efforts.

“Our thoughts and prayers are with the victims, their loved ones, and everyone impacted by the tornado,” an Amazon spokesperson said.

Thoughts and prayers, unfortunately, are not enough to fix Amazon’s broken warehouse system. Despite small concessions here and there, Amazon still generally treats its workers without much humanity. The company’s harried quest for world domination has left innumerable bodies in its wake. It’s impossible to say whether or not these six deaths could’ve been avoided; Amazon’s oppressive policies certainly didn’t help the situation, though.