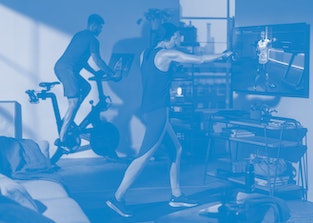 Peloton's decrease in value over the last year.

Like many of us, Peloton isn’t exactly having a spectacular 2022 thus far. Last month the company ended up temporarily halting production of its flagship fitness products due to a widespread decrease in interest; it also reportedly laid off about 41 percent of its sales and marketing staff. So it’s little surprise that Peloton is looking around for the nearest exit sign.

It’s looking like a full sale to a larger company is on Peloton’s not-too-distant horizon, according to an inside scoop from The Wall Street Journal. And one company considering buying up the company is — shocker — Amazon.

The e-commerce giant is still in the very early talking stages of a potential sale, and WSJ’s sources made sure to mention that neither Amazon nor Peloton are actually ready to follow through just yet. Right now Peloton is valued at about $8 billion. That’s no small price tag, but it’s significantly less than the $50 billion it peaked at in 2021.

Amazon is currently valued at about $1.6 trillion; buying Peloton would amount to pocket change. If the FTC lets the deal go through, that is.

Peloton’s downward spiral — Peloton is one of those somewhat rare companies that managed to actually make more money during the pandemic than before it. With gyms closed around the world, suddenly everybody wanted a smart bike or treadmill to use at home. Peloton coasted on this easy success through 2020. Its most pressing issue for a while was that it actually had too many orders to fulfill them all on time.

But then, of course, the COVID-19 vaccine became widely available. People started going back to the gym. Peloton’s Tread+ turned out to be a lethal danger to children and pets. Peloton got greedy. Its stock price creeped downward by more than 80 percent.

With that kind of downward trend, Peloton is a buyer’s dream — available at an inexpensive price, full of avid users, and stuck in a position where anything but selling appears like a losing game.

Antitrust is the new black — Amazon has more than enough capital to purchase Peloton and incorporate it into the ever-extending Amazon brand. The real issue Amazon could face here is that antitrust watchdogs like the FTC might block the deal entirely.

The FTC has been cracking down on antitrust scrutiny more than ever. Deals like Nvidia’s hopeful acquisition of Arm Limited have been set to fully fall apart by the FTC’s decisions. Amazon has thus far had limited success with its forays into the fitness world; an acquisition like Peloton would add significantly to Amazon’s already-overwhelming power.