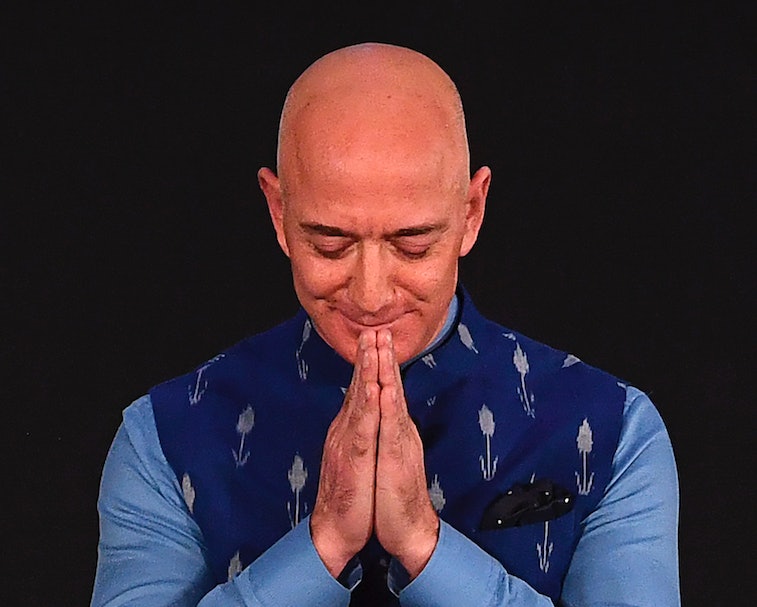 In a development that should surprise exactly zero people, Amazon is now relying on public compassion and money to help its overworked and overwhelmed contract workers. The jaw-dropping "relief fund," first spotted by Popular Information, seems an obscene request coming from a company led by the world's richest man even if it's contributed to the effort itself.

But, it's par for the course. As Input previously reported, Amazon is actively trying to do away with paid sick leave after part-time Amazon warehouse workers in Chicago won paid time off in the wake of the deadly coronavirus.

Jeff Bezos wants your help — The Amazon Relief Fund claims that it is "focused on supporting our United States-based Delivery Associates employed by Delivery Service Providers, our Amazon Flex Delivery Partners, and Associates working for Integrity Staffing, Adecco Staffing, and RES Staffing, and drivers and support team members of line haul partners under financial distress due to a COVID-19 diagnosis or quarantine."

At first glance, a relief fund in the time of a pandemic sounds noble albeit heartbreaking. As governments sorely let down their populaces with agonizingly slow and shockingly limited responses, people will crowdsource solutions to help each other. But when you consider the fact that this is a relief fund relying on the public and not its CEO, who has a net worth of at least $117 billion (as Bloomberg estimates) and owns a $65 million Gulfstream Jet and an aerospace exploration enterprise, rage is the natural reaction.

Abject conduct from a $1 trillion enterprise — For the sake of clarity, Amazon itself donated $25 million to its fund but relying on public donations for its contract workers is a dash unsightly and unreasonable considering the company's worth at a whopping $1 trillion. Bezos' company should be footing the bill for its contract workers who got the coronavirus while doing essential work for his empire. It seems like the company expected justified backlash for soliciting public money, which explains why it added that sheepish disclaimer "we aren't expecting anyone to" donate.

If Bezos sincerely wanted to help, he could easily pour a sizable amount of his stunning wealth into this fund for his ever-growing workforce without soliciting donations from the beleaguered and scared public. It's the least he could do. But given how Amazon workers are reportedly treated — from reports of gruesome injuries to workers experiencing frequent suicidal ideation — something tells us that may not happen anytime soon.

Update: The headline of this post has been updated to reflect the odd nature of Amazon's behavior.