“Firing whistleblowers isn’t just a side-effect of macroeconomic forces, nor is it intrinsic to the function of free markets. It’s evidence of a vein of toxicity running through the company culture. I choose neither to serve nor drink that poison.” 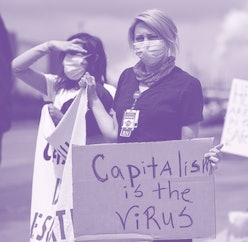 Tim Bray, a long-time software engineer and Vice President at Amazon, left his job on May 1 over the company’s decision to fire “whistleblowers who were making noise about warehouse employees frightened of COVID-19.” Bray revealed that he’d left the position in an open letter posted to his website entitled “Bye, Amazon.”

Bray says his snapping point came when employees started getting fired for organizing around Amazon’s lack of action in stopping the spread of COVID-19 in its warehouses. He called the company “chickenshit” for firing these workers and said they’re “designed to create a climate of fear” in the company.

In his open letter, Bray says he couldn’t rightfully continue his position as VP while despising the company’s actions — so he resigned. He points out that the recent firings are a symptom of major power imbalances at Amazon.

Throughout the COVID-19 pandemic, Amazon has repeatedly stated that its workers’ safety is the company’s top priority. Its actions tell a different story entirely: one where “safety” is dictated upon high authority and the workers who power the company’s main operations are allowed no voice in the matter. Bray’s very public resignation makes this fact clearer than ever.

It’s all about the warehouses — Bray states in his letter that “it’s a matter of fact that workers are saying they’re at risk in the warehouses.” That’s what Bray’s resignation ultimately loops back to: the way Amazon refuses to listen to how its warehouse workers feel about the spread of COVID-19 through their ranks.

Many of the company’s employees feel that Amazon’s response has been sorely lacking and that their concerns have either been met with apathy or harsh repercussions. One worker was fired after organizing a protest against his warehouse’s lack of action; two others were fired last week for tweeting their own criticism and offering to match donations to warehouse workers. A third employee was asked not to complete his last few weeks of work after inviting some coworkers to a virtual chat with some warehouse employees.

When employees speak up about their discomfort with the situation, Amazon fires them. That practice serves to reinforce Amazon's preference to keep its lowest-paid workers down, despite being the backbone of the company's shipping operations.

Power imbalances — Bray’s takedown of the situation at Amazon calls to attention the broader issues at play here. The company’s refusal to listen to warehouse workers — and subsequent firing of anyone who criticizes it for doing so — proves just how little power the company’s warehouse employees have.

Bray speaks in particular from his experience running Amazon Web Services (AWS), where workers are paid very well and treated humanely. AWS workers have power because of this, he’s said, because anyone who’s unhappy can “walk across the street and get another job paying the same or better.”

Meanwhile, factor workers are treated like pawns in Amazon’s massive game of chess: necessary but expendable. As Bray so perfectly puts it: “they’re gonna get treated like crap, because capitalism.”

As Bray notes in his letter, it’s not just warehouse workers who are upset about the power dynamics at play here. Attorneys general from 14 states have spoken out about the issue — N.Y. State’s more than many.

This isn’t the first time Bray has been outspoken about Amazon’s business practices. Last year he was the highest-ranking employee to sign an open letter protesting the company’s involvement with fossil fuel companies.