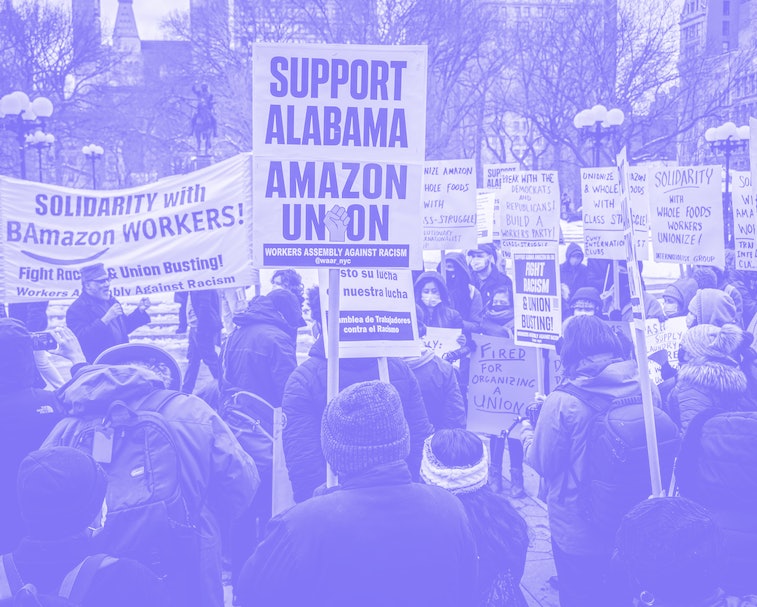 As Amazon warehouse workers continue to push for unionization in Bessemer, Alabama, Amazon is doing everything possible to interfere. The Retail, Wholesale, and Department Store Union (RWDSU) — the organization through which the warehouse is unionizing — has filed a detailed list of complaints against Amazon for what it sees as improper election interference.

The official complaint, which was filed with the National Labor Relations Board (NLRB) on April 7, seeks to set aside the current election process happening in Bessemer, on the grounds that Amazon’s meddling would render its results void. That’s the same way the Bessemer warehouse’s first election attempt ended.

The list of anti-union activities seen by the RWDSU is even longer than you might expect. Allegations include suspending workers who openly supported the union, surveilling activities in break rooms, removing pro-union literature, and even threatening to close the warehouse if the union won its vote.

This could set back Bessemer’s unionization process by many months once again if the NLRB accepts the petition to set this month’s vote aside.

Interference at every turn — After the collapse of Bessemer’s first union vote, warehouse workers were granted another chance to unionize by the NLRB. Amazon technically won that election two-to-one, but the RWDSU successfully argued that it did so by intimidating workers into voting against the union.

The RWDSU’s full list of objections is lengthy. Very lengthy. You can read the whole list on the RWDSU’s website if you’d like a glimpse at the extent to which Amazon has gone in this second Bessemer election.

Here’s a selection of those objections:

The tide is turning — Now that warehouse employees in Staten Island voted to officially create the first-ever Amazon union, the e-commerce giant is sure to be more openly anti-union than ever. Allegations of illegal interference have done nothing to stop it from going all-in on its bullying tactics this time around.

But Amazon isn’t winning everywhere. Warehouse workers in Staten Island officially voted to form a union last week, a historic win that’s likely to motivate others to seek the same.

By filing another complaint with the NLRB, the budding Bessemer union is showing Amazon it’s not willing to stand down in the face of intimidation. The process may be long and exhausting, but Bessemer is willing to take all the time it needs for it to be done right.