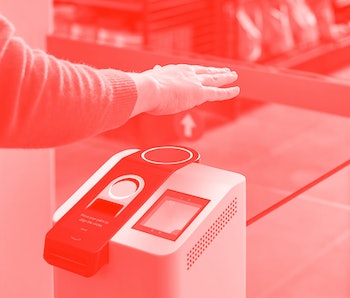 More than 30 activist groups and 200 artists have signed an open letter demanding that companies reject Amazon’s palm-scanning technology once and for all. The letter, which was penned by Fight For The Future, details the ways in which palm-recognition technology can be just as harmful as the facial recognition tools many lawmakers and companies have turned against as of late.

The letter focuses on the spread of this technology — called Amazon One — to live music venues like Colorado’s Red Rock Amphitheatre, which announced its intention to begin using it in September. It’s also leveled at AXS — a digital ticket provider — and AEG Worldwide, owner of many stadiums around the world.

“Introducing palm scanning devices is a slap in the face to fans and artists that have fought so hard to promote safety for everyone at live events,” the letter reads.

The letter points out that, beyond being invasive, installing Amazon One terminals at AEG stadiums is also just hypocritical. As recently as 2019, AEG took a strong stand against using facial recognition data for its events — and palm recognition technology shares many of facial recognition’s harms.

The dark side of the palm — Fight For The Future’s letter presents the worst-case scenarios associated with Amazon One. This isn’t about the daily operations of stadiums themselves; it’s about the unwieldy power associated with all biometric data collection.

The letter’s conclusions about where palm scanning could lead are similar to the alarms that have been sounded for years about facial recognition. Here’s what it boils down to: Biometric data makes it very easy to track people. Much easier than data like your phone number or address. Any access to that data is extremely dangerous.

Handing over your biometric data to Amazon is problematic enough — the company’s privacy track record is pretty horrific — but the situation gets darker. Biometric data stored in the cloud, no matter how secure, is hackable, for one thing. For another, Amazon could choose at any time to hand its stores of biometric data over to government organizations like ICE and DHS.

Ban it all — Biometric scanning tech is all about convenience. Scanning your palm at the door is quicker for event staff and easier for patrons than using physical or digital tickets. That convenience is what tempts companies like AEG to work with Amazon.

It’s impossible to implement any biometric technology without risking user privacy. That risk is multiplied many times over for marginalized populations. Without proper oversight from the government — which doesn’t exist at the moment — it’s impossible for Amazon One’s benefits to outweigh its dangers. Lawmakers have raised concerns over the technology, but no policy change has been enacted yet.

Will this letter sway AEG and its partners to go back on their big deal with Amazon? As much as we’d like to say it will, the honest answer is that the deal probably won’t fall apart unless the money involved is seriously threatened. The shared sentiment against Amazon One is powerful nonetheless, and we can hope the show of force at least brings more public attention to the technology’s risks.