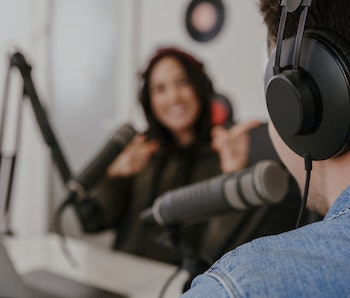 Amazon is apparently set to begin offering podcasts soon via its Audible and Amazon Music services, which would be pretty great news if it wasn’t for its recent attempt at the stipulations of clients’ terms. According to emails circulating among podcasters, shows initially would only be allowed onto the company’s sites if their content was devoid of any critical or disparaging comments about the Big Tech giant.

Alexa, define the word 'censorship'— The stipulation, which has since been quietly removed from contracts, would have required that any podcasts offered through their sites, “not include advertising or messages that disparage or are directed against Amazon or any Service.” The fine print went viral earlier this week courtesy of Corey Quinn, which is what seems to have prompted Amazon's sudden change of heart.

"The idea that you could have a podcast on a platform that explicitly prohibits disparagement of one of the largest companies in the world turns ‘journalistic integrity’ into a punchline," Quinn, Chief Cloud Economist at Duckbill Group, told Input.

When asked what he thought Amazon's latest censorship attempt, comedian, climate change activist, and co-host of The Dollop, Dave Anthony, told Input, "I’d do the same if I abused workers and treated cities the way Amazon does. But I would never treat anyone that way. The robber barons would be proud of this 19th century Gilded Age nightmare of a company."

This isn’t the first time artists and entertainers have taken a stand against Amazon’s political and business strategies, either. Last year, many indie musicians staged a boycott of Amazon-sponsored events and streaming services after news broke that the company took part in lucrative contracts with multiple law enforcement agencies, including ICE.

Not setting a prime example — Amazon’s quiet attempt at stifling free speech through its services does little to quell worries that the company wields an inordinate amount of power over retail, streaming, and media services in America. After federal antitrust hearings a few weeks back, state attorneys in California and New York have both launched probes into the company stifling third-party competition.

It’s unclear if Amazon’s legal teams ever expected the anti-criticism clause for podcasters to ever make it into final contract negotiations, or if they were simply testing the limits of their oversight. In any case, it’s what we in the business like to call “a real dick move.”