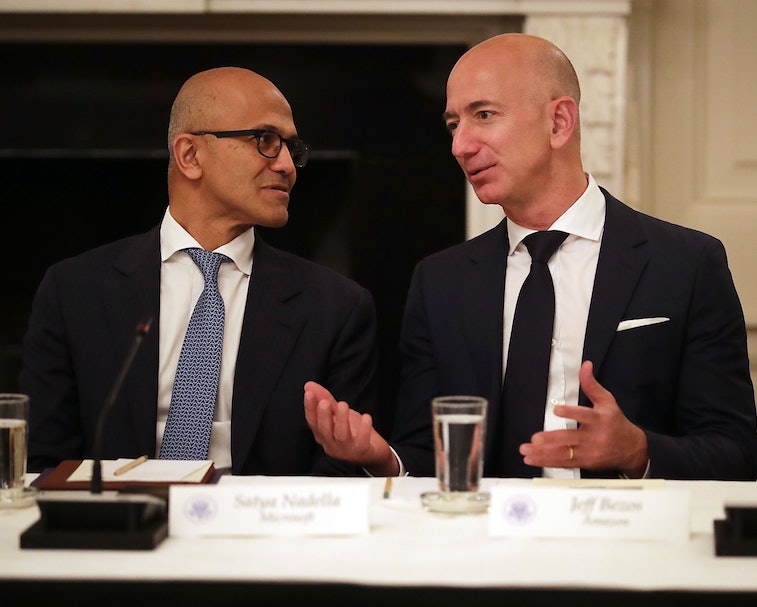 The Pentagon’s JEDI contract continues to fuel tensions between Amazon and Microsoft. After the cloud-computing contract went to Microsoft last fall, Amazon has done everything in its power to get a second chance. On Thursday, Microsoft dropped the equivalent to a corporate diss track: a snide blog post which Amazon answered the following day.

The two posts from each company’s vice president of communications would be delicious distractions if Amazon’s moves weren’t so predatory.

Previously on Amazon and Microsoft Go to War — Last October, Microsoft won the JEDI contract which aims to use cloud computing to update the military’s computing power and abilities. Not wanting to leave $10 billion on the table, Amazon quickly directed its anger towards the Trump administration in a bid protest. While Trump’s disdain for Amazon CEO Jeff Bezos and the company’s claim that he tried to block it from getting the contract is evident, Trump was reportedly unsuccessful.

Though Amazon’s lawsuit wasn’t pointed directly at Microsoft, the initial blows were still heavy. In redacted court documents, Amazon states that any review of the decision would reveal “egregious errors on nearly every evaluation factor” including “ignoring the unique strengths of AWS's proposal” and “overlooking clear failures in Microsoft's proposal to meet JEDI's technical requirements.”

In February, Amazon was granted a temporary restraining order it requested a month prior as part of the protest. Microsoft has not been able to perform any work in relation to the contract since then. By March, the Department of Defense began buckling under the pressure to reconsider the contract. A month later, in response to a DoD report on how the procurement process was handled, a blog post from a Microsoft lawyer warned Amazon doing what it does best: copying a competitor and undercutting the price.

Once Microsoft won the contract, Amazon was made privy to information about its bids and in this case, some proprietary information as well. Microsoft believes a redo would result in Amazon slashing its price and potentially using Microsoft’s technology to improve Amazon Web Services.

Tune in this week — Following a brand new, private bid protest on Tuesday, Microsoft had enough. “The only thing that’s certain about Amazon’s new complaint is that it will force American warfighters to wait even longer for the 21st-century technology they need – perpetuating Amazon’s record of putting its own interests ahead of theirs,” wrote Marine veteran and Microsoft’s VP of Communications Frank Shaw before painting Amazon’s legal battle as a front for a sore loser.

In response, Amazon’s Drew Herdener calmly details the reasoning behind the company’s persistence in this legal battle before drawing blood. “Microsoft is doing an awful lot of posturing … Nobody knowledgeable and objective believes they have the better offering … To be clear, we won’t back down on this front regardless of whether Microsoft chooses to try to bully its way to an unjust victory. We also won’t allow blatant political interference or inferior technology to become an acceptable standard,” wrote Herdener before tacking on the company’s support and respect of those in the military.

Roughly eight months have passed since Microsoft was awarded the contract at the end of a two-year procurement process. Barring the disgust you might be feeling right now for either of these companies evoking "support our troops" patriotism for a petty squabble, Microsoft manages to still be the good guy. If Amazon forces the military to wait any longer, how much does it really care?