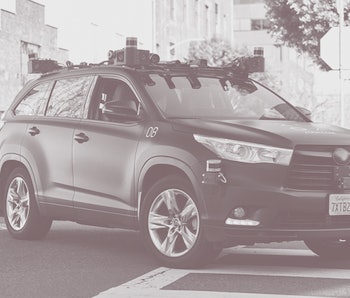 Amazon is in late-stage talks to purchase self-driving car company Zoox Inc., reports The Wall Street Journal. The deal is tentatively valued at “less than” $3.2 billion, which is how much Zoox raised in funding in 2018, according to people familiar with the matter. Those sources say the deal is still at least a few weeks away and could fall apart.

Like most companies centered on transportation, Zoox hasn’t been doing so well lately. The company was forced to lay off more than 120 of its human safety drivers last month because of business disruptions stemming from the COVID-19 pandemic. Shelter-in-place orders in California effectively rendered the company’s test drives impossible for the last few months.

This isn’t the first time Amazon has shown interest in the burgeoning self-driving automotive industry; last year the tech giant invested in Aurora, another self-driving vehicle startup. The size of that investment wasn't disclosed.

It’s a bad time to be a car company, but it’s a good time for Amazon, which continues to profit from increased online shopping during the ongoing pandemic. Amazon has reportedly been in talks with all kinds of industries — from movie theaters to COVID-19 testing labs — to use those profits to expand its empire. Meanwhile, its workers continue to suffer during the pandemic.

Zoox who? — You’ve probably never heard of Zoox. The company doesn’t make headlines very often because its testing of self-driving vehicles is kept mostly under wraps

Zoox has been around since 2014, and by 2018 the company had raised $800 million in venture capital, with a total valuation of $3.2 billion. Since then the company has raised about $200 million more in capital, setting its total somewhere around a billion dollars.

You may also know Zoox from its lawsuit last year with Tesla. In March 2019, Tesla sued Zoox and several former Tesla employees for sharing Tesla’s proprietary information and trade secrets. The company has since admitted that four of its employees did indeed take confidential documents from Tesla. The two companies settled out of court for an undisclosed amount, along with the agreement that Tesla would audit Zoox to ensure none of its information is still being used.

Self-driving cars? In this economy? — No one’s doing much traveling right now, which means pretty much anyone that makes money off travel is in a bad place right now. The autonomous sector is no different. Other self-driving vehicle startups have laid off employees or folded altogether, as is the case with ex-startup Starsky Robotics.

Stefan Seltz-Axmacher, Starsky’s former CEO, wrote in March that the timing of the novel coronavirus ultimately forced the company to close.

“Our approach, I still believe, was the right one but the space was too overwhelmed with the unmet promise of AI to focus on a practical solution,” he stated. “As those breakthroughs failed to appear, the downpour of investor interest became a drizzle.”

Amazon is perfect for the job — Seltz-Axmacher is right: most investors just don’t have the funds to back long-shot endeavors like self-driving cars right now. That’s where Amazon is different. The company just keeps getting richer. If anyone has surplus capital to spend on swooping in to save a company focused on autonomous vehicles, it’s Amazon.

If Amazon does end up purchasing Zoox, it will be competing directly with Intel, which just acquired Israel-based Moovit for $900 million. Both Zoox and Moovit have ambitions of dominating the robo-taxi market rather than building consumer vehicles.

However, the deal might still fall apart. If that’s the case, maybe Amazon could take that cash and spend it on improving its essential workers’ lives instead? Just an idea.