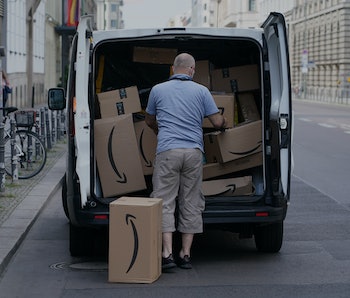 According to a recent report from Vice, Amazon has routinely tasked employees with spying on the company's Flex Drivers’ semi-private discussion groups through social media platforms like Facebook and Twitter. While conversations are often sorted into categories concerning bugs within the company app, documents also show workers are asked to monitor and “escalate” up the company ladder pro-labor subjects like unionizing and potential strike action.

A team dedicated to spyfare — The newly uncovered evidence explicitly shows just how aggressively anti-labor tactics have been employed for years against the company’s full-time and now even its gig-based workers. Dozens of semi-private Facebook groups such as “Amazon Flex Drivers of Los Angeles,” “Amazon Flex Drivers,” and “deactivated Amazon Drivers” along with Subreddit message boards and even simple Twitter keyword searches have been monitored, often in real-time, to look for evidence of protest or strike organization and keep tabs on just who is involved in those talks.

Those who Amazon tasked with this job were referred to in one document as the “Advocacy Operations Social Listening Team,” and expected to keep their work confidential and only relay their findings to designated higher-ups within the organization.

This isn’t the first news of labor-busting — The news of labor infiltration comes just days after Amazon job postings for full-time labor-busting, quasi-Pinkertons went viral. New hires were asked to deliver reports on “labor organizing threats against the company,” as well as “track funding and activities connected to corporate campaigns (internal and external) against Amazon, and provide sophisticated analysis on these topics.” The company quickly removed the job listings, claiming they were uploaded “in error.” This despite the ads being up for months, and having been updated during that time.

The least they can do — Meanwhile, Flex Drivers are technically (and conveniently) classified as contractors, so they do not receive basic benefits like sick leave, overtime, paid leave, or healthcare insurance. These are the same sorts of workers who are reportedly hanging their cell phones from trees outside Amazon factories to be picked first for gigs because they are so desperate for work.

Instead of the incomprehensibly wealthy company (and its incomprehensibly wealthy megalomaniac CEO) shelling out a little extra for the barest of humane job perks, it reportedly punishes its workers for hand-washing breaks during a pandemic. Of course, despite Amazon’s increasingly aggressive methods of labor-monitoring and discouragement, it’s unlikely that its employees will stop its organizing. If anything, it’ll only expedite the process.