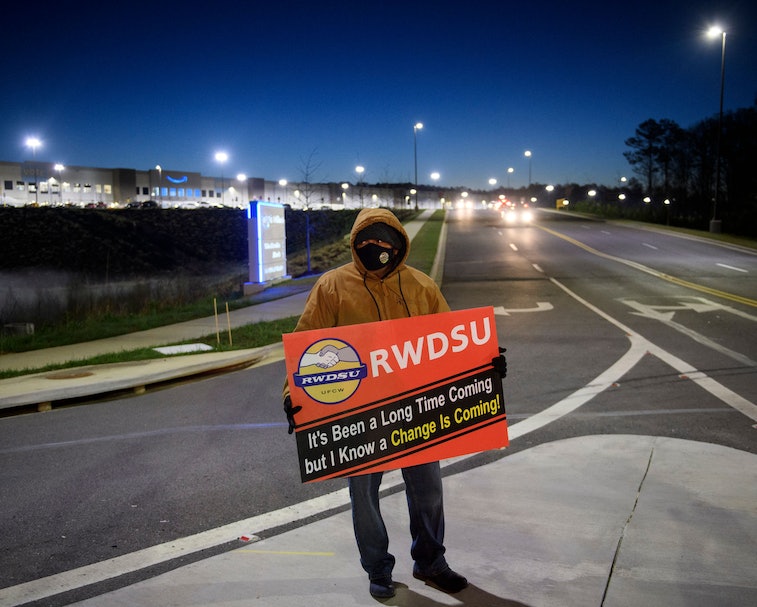 Amazon has obtained enough votes to crush unionization efforts at its Bessemer, Alabama, warehouse, CNBC reported on Friday. The company now boasts over two thirds of the counted ballots while hundreds of ballots remain contested and still pending for a count by the National Labor Relations Board.

In other words, Amazon now has met the requisite to potentially claim this union election. At the moment, approximately 700 votes have been counted in favor of becoming part of the Retail, Wholesale and Department Store Union. In contrast, Amazon currently has 1,608 votes against the union. The long and rather vicious fight between hundreds of Alabama workers and Jeff Bezos’ executive ranks looks like it’s about to wrap up.

To view the latest stats, which could change, check out CNBC's real time vote tally. The fight to represent some 5,800 Amazon workers could change tides if the NLRB can legally determine whether contested ballots are eligible for counting and inclusion. This is a lengthy process that can take weeks at times.

What happens now — At the moment, 500 ballots remain uncounted and contested. Almost 200 of these ballots are being contested by the union while 300 face a challenge from Amazon itself. Amazon's justification for contesting these ballots is based on employment status. The company told CNBC that ballots being challenged were those cast by people who no longer worked at the company during the voting duration.

The news arrives just a day after the More Perfect Union accused Amazon of attempting to pressure the United States Postal Service into putting up an illegal mailbox outside the Bessemer warehouse. The union accuses Amazon of trying to influence the union election with this box but USPS has rejected the claim.

As the company contests hundreds of votes based on employment eligibility grounds, union supporters counter the push by saying that Amazon has been actively trying to compromise union efforts not only through a mailbox by its warehouse but other nefarious means. One of those accusations include reports that Amazon actively considered using surveillance software against its union-sympathetic workers. Yet another case of criticism involves Amazon's aggressive push to distribute Vote No pamphlets against the union drive.

RWDSU president Stuart Appelbaum has openly condemned the power imbalance in the fight between everyday laborers and the astronomically powerful Amazon, as CNBC reports. And he’s ready to fight one more time once the official results come in. It’s this “egregious” behavior, Appelbaum urges, that needs to be taken by horns.