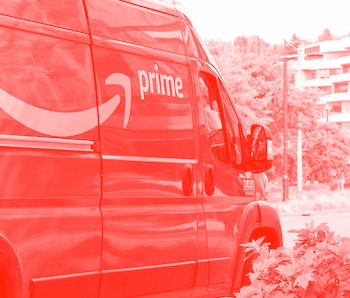 Earlier this year, an Amazon delivery van collided with the back of a car in which 24-year-old Ans Rana sat. The accident left him with brain and spinal cord injuries; he’s now unable to do quotidian tasks and has to use a motorized wheelchair to get around. Rana is suing Amazon, Bloomberg reports, alleging that the company’s driver surveillance technology is responsible for the life-changing crash.

Rana’s lawsuit, which he filed in Georgia state court, claims that the Amazon driver rear-ended his brother’s Tesla Model S because Amazon’s strict delivery requirements rush its drivers to the point of danger. Amazon has long been criticized for its harsh working conditions, but recently, the company added invasive new surveillance technology to keep drivers in line with their delivery goals.

Amazon refuses to assume any culpability for this crash or any others because of a very purposeful loophole. Delivery drivers aren’t directly employed by Amazon itself — they’re hired through a collection of third-party delivery companies.

Unrealistic standards — Amazon’s rapid delivery network requires an enormous fleet of drivers willing to traverse mountains for customers. As motivation for drivers to keep up the pace, Amazon presents them with daily quotas, sometimes nearing 400 packages per day.

Amazon began installing AI-powered camera systems in its vans earlier this year to monitor for productivity rates and driving data. As you might expect, being constantly watched by Amazon AI is quite anxiety-inducing to many drivers. More than a handful of drivers have reported peeing into bottles and missing meals to avoid angering the Amazon gods.

The human cost of Amazon’s domination — Amazon argues that, as its drivers are hired through third-party delivery companies, it can’t legally be held responsible for what happens to those drivers on the job. But it’s Amazon’s standards and tech that pushes these drivers, Rana’s lawsuit argues. Amazon is micromanaging drivers’ intense workloads; it’s Amazon’s logo the vans and uniforms bear. Amazon wants to take the credit for the quick delivery but not for trouble that ensues on-route. The company has done the bare minimum in response to delivery driver crashes, like installing annoying backup alarms in its vans.

In its quest for complete retail domination, Amazon has entirely thrown aside the notion of humanity. As long as the wheels keep turning and packages get delivered on time, Amazon doesn’t care how its workers fare. The human part of the equation is only a tool. And all too often it’s innocent bystanders like Rana who end up losing the most.