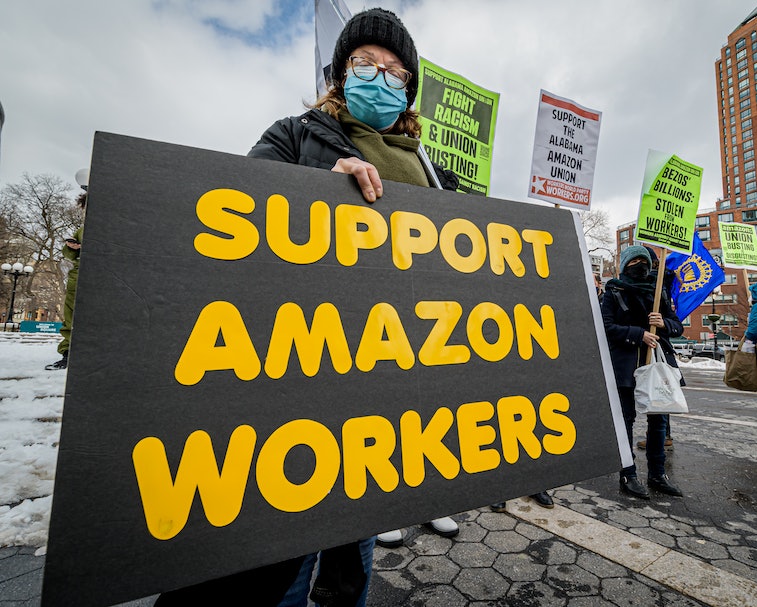 The 1935 National Labor Relations Act prohibits management from attacking its workforce for organizing or forming unions, including efforts to make their workplace better. But Amazon, which is being sued by New York state for lack of workplace safety during the pandemic, doesn't seem concerned with that. According to Motherboard, a National Labor Review Board (NLRB) inquiry found Amazon illegally interrogated an employee, Jonathan Bailey, for leading walk-outs protesting COVID-19 conditions at a Queens warehouse in March 2020. Although Amazon broke the law by attempting to intimidate Bailey, the case didn’t go to court as the company has settled the matter with him.

In late March last year, Bailey organized a protest against what he and many other employees saw as Amazon’s inadequate safety conditions for workers during the pandemic. So far, more than 19,000 Amazon workers have contracted the virus while at least eight have died. Bailey told Motherboard that he led a walkout on March 20 alongside at least a dozen of workers. The next day, a regional manager questioned Bailey for 90 minutes about his activities and warned him that his protest had created unsafe conditions at the company. This person introduced himself as a former FBI agent which, true or not, isn’t usually the way one starts a conversation with a colleague.

Aside from failing to adequately defend its staff against an impending pandemic, Amazon is also accused of using the coronavirus pandemic to generate more revenue by inflating the prices of basic necessities, including face masks, antibacterial soap, and toilet paper. Which, given its track record, isn’t all that surprising.

Getting crowded under the rug — An Amazon spokesperson told Motherboard, "While we disagree with allegations made in the case, we are pleased to put this matter behind us. The health and safety of our employees is our top priority and we are proud to provide inclusive environments, where employees can excel without fear of retaliation, intimidation or harassment."

Part of the agreement requires the company to be explicit about workers' right to plan and strategize walk-outs. Amazon needs to display messages outside break rooms making it clear it "will not ask you whether or not you support employee walkouts, or about any other protected concerted activities," Motherboard, which has seen a copy of the NLRB settlement, reports.

The news surrounding Amazon interrogating its own worker comes just weeks after the company gained infamy for investigating solutions for spying on workers to hurt a union election at an Alabama warehouse. The votes will be counted on March 30, and if the employees succeed at gaining a majority, this will be the very first Amazon union in America. But, given Amazon's record of surveilling and its labor force and union-busting tactics, we fear this battle has plenty of skirmishes left in it.