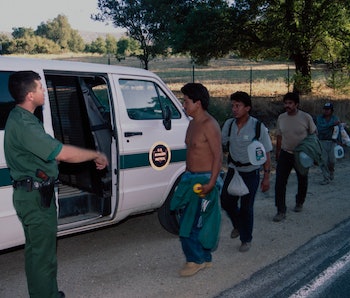 Some of the country’s biggest tech companies are skirting around past public pledges to cease working with horror show agencies like ICE and CBP by employing third-party intermediaries to secure contracts. According to a deep dive from Business Insider published earlier today, mega-corporations like Google, Amazon, and Microsoft are all currently utilizing middlemen to get by on technically not taking any cash directly from abusive, militarized law enforcement groups.

Insider found at least 26 active contracts between the three companies for services ranging from clerical applications such as Microsoft Office and Google Workspace, to cloud data platforms like Amazon Web Services. Although these Big Tech goliaths sometimes aren’t aware of contracts’ specifics since they are facilitated through third-party resellers, they often are... and still sign off on the deals.

Microsoft is arguably the worst offender — Of the Big Three investigated, it appears that Microsoft is the most opportunistic of the bunch. Insider reports that since 2004, ICE awarded over 250 contracts specifically mentioning Microsoft services, including Azure cloud access. These deals total billions of dollars and are often presided over by one of its most major intermediary companies, Dell.

The worst of both worlds — To be honest, we’re not entirely sure which scenario we prefer: major tech companies secretly dealing with human rights-violating state agencies, or major tech companies that don’t care about optics and continue to sell their products openly to groups like ICE and CBP.

Case in point: Coinbase, a company already problematic for numerous reasons, is more than happy to announce its lucrative deals with Immigration and Customs Enforcement. Then, of course, there’s Palantir, which.... yeesh. We try not to think too long about that Bond villain organization if we can help it.