“We will continue to explore new ways to support our immigrant and non-immigrant workforce, and strengthen those efforts moving forward as we strive to become Earth’s Best Employer.” 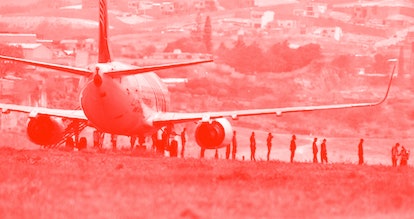 It takes a lot for Amazon to surprise us, these days, but its co-ownership of an airline used for ICE’s deportation efforts has done just that. When we say Amazon has a large stake in an airline used for deportations we mean just that, somehow. Same goes for that airline has been accused of abusing deportees while flying. Somehow these are factual statements based in research compiled by The Intercept.

Here’s a brief overview of how this ludicrous partnership came to be. Amazon purchased $131 million worth of Air Transport Services Group Inc. (ATSG) in 2019, giving it ownership of approximately 19.5 percent of the company. An ATSG subdivision called Onmi Air International flies people around for the government — including Immigration and Customs enforcement (ICE).

So there you have it. Amazon owns just under 20 percent of the airline used for deporting immigrants. (The Intercept notes that Amazon reserves options that could let it expand that stake to about 40 percent.) An airline which, by the way, is well-documented as a site of extreme brutality. Suddenly Amazon’s other offenses no longer appear quite so serious.

Welcome to ICE Air — Stories that have emerged from Omni Air International (colloquially known as “ICE Air”) are, to be blunt, horrifying. The Intercept’s report includes only a selection of them, and still the number is staggering. Almost 100 formal allegations of abuse were filed with the Department of Homeland Security between 2007 and 2018 — plenty more have surely gone unreported.

We’ll provide just a summary of the stories here; if you feel like reading the more grotesque details you can head over to The Intercept. ICE Air deportees have alleged physical beatings, verbal abuse, denial of restroom access, and the use of straitjackets. A restraint device called the WRAP is sometimes used to bind a deportee’s legs together and their arms behind their back in a seated position — for any length of time.

The University of Washington Center for Human Rights published a series of reports in 2019 that sums up the way in which these abuses are able to happen quite succinctly. “Over the past decade,” the report says, “the institutional infrastructure behind these flights has shifted from a government operation run by the U.S. Marshals Service on government planes, to a sprawling, semi-secret network of flights on private aircraft.”

Hey Amazon, this you? — Activists have been working for years to raise public awareness about Amazon’s investment in ATSG. They hope doing so will pressure Amazon to divest from the airline company. ICE Air has conducted at least 21 deportation flights since Amazon purchased its stake.

Amazon’s bad track record has only worsened in recent years, as details of hellish warehouse conditions, overworked delivery drivers, and aggressive product cloning methods have been been brought to the public’s attention. Owning 20 percent of an airline known for mistreating deportees surely takes the cake, though.

Activists point out that, in typical Amazon fashion, co-owning ICE Air runs directly against Amazon’s public-facing “commitment to immigrant rights.” And while we’d like to believe activism will actually force Amazon to divest from such an atrocious company, this is still Amazon we’re talking about. If it’s making the company money, it’s not going to be easy to convince Amazon to shut it down.