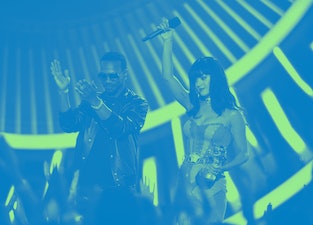 How many melodies it generated using the popular C-scale.

In a TEDx talk released in January, copyright lawyer, musician, and programmer Damien Riehl pulled out a hard drive. That drive contains every possible melody generated from an algorithm he created with musician and programmer Noah Rubin. The algorithm recorded every 8-note, 12-beat melody at a rate of 300,000 melodies per second.

Using the popular C scale (major and minor), the algorithm yielded 68,719,476,736 melodies, according to The Atlantic. Riehl and Rubin put all the melodies in the public domain in an effort to change the way copyright law affects songwriters.

The problem with copyright law — This algorithm isn’t actually all-encompassing; there are still more combinations of notes, beats, and rhythms, but the number is finite. As Riehl points out in his talk, it’s easier to come across identical melodies and chord progressions in music than it is for two authors to coincidentally write the same paragraph. Nonetheless, when songwriters are accused of plagiarizing any of these components, even if they can prove they never heard the “original” song, they can still lose the case for subconsciously copying the music.

Modern examples — Plenty of popular cases exist, but we don’t even have to go that far back. A Christian rapper accused Katy Perry’s “Dark Horse” of ripping off a musical hook (one that can be found in an even older Art of Noise song) and she had to fork over $2.8 million. There are cases when you can see why the subconscious plagiarism verdict exists, like Sleigh Bells’s lawsuit against Demi Lovato. The drums in the pop singer’s “Stars” seem to directly pull from the Sleigh Bells “Infinity Guitars” and “Riot Rhythm,” but the producers claimed the songs weren’t sampled.

Here's a Spotify playlist with the pop songs mentioned in this article.

But can you copyright a rhythm, a vibe? Out of the three cases, “Blurred Lines” and “Got to Give It Up” are the most clearly different in melody and beat. As producer Pharell points out in a Rolling Stone interview after losing a lawsuit from the Marvin Gaye estate over “Blurred Lines,” genres like salsa music tend to feel the same and “you can’t copyright a feeling.” Many artists agree, with 200 musicians signing an amicus brief for Pharell and Robin Thicke’s appeal in 2016.

While legal experts told The Atlantic they don’t think putting the brute-forced melodies in the public domain would absolve artists from copyright infringement, they all agreed the current state of music copyright law is ridiculous. What Riehl and Rubin hope to do, as others build on their work and eventually exhaust the possibilities for song structure, is push for copyright law reform.