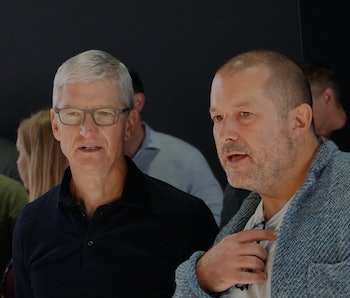 Jony Ive, the famed Apple designer who worked on key products like the original iPod, iPhone, iPad, and MacBook, is joining Airbnb. The short-term rental company has hired Ive as a creative consultant, according to a report from The Information.

CEO Brian Chesky confirmed Ive’s appointment on Wednesday and said it would be “a multi-year relationship to design the next generation of Airbnb products and services.” Ive is actually the second ex-Apple executive to join Airbnb in recent years: Hiroki Asai, a former Apple VP, joined as Airbnb’s head of marketing in July.

Ive will be stepping in just as Airbnb’s chief design officer, Alex Schleifer, leaves the company. Schleifer has been running the design side of Airbnb since 2015. Airbnb says it will still be seeking to fill Schleifer's now vacant role separately.

Airbnb has had a predictably difficult time weathering the pandemic — the company laid off almost 2,000 of its 7,500 employees in May, and has faced backlash for being used for host quarantine-flouting parties. But the company — and its investors — still believe in its potential for longevity. Airbnb filed plans for an initial public offering on August 19 and has been privately valued at $31 billion.

Nonetheless, it’s difficult to see Ive’s appointment as anything but an attempt to revitalize Airbnb ahead of its listing as the company faces the fallout of an incredibly tumultuous year.

Buddy buddy — The jump from pivotal Apple designer to Airbnb employee is a strange one to be sure. What’s he going to design, a vacation-themed MP3 player?

But Chesky and Ive have been friendly for years, as The Information points out. Ive wrote the entry for Chesky in Time’s 100 most influential people of 2015 list and they also worked together on Airbnb’s logo redesign in 2014. Chesky is a long-time admirer of Apple’s design work, and he’s been dropping hints to employees for months that he might try to appoint Ive to the new role.

Internal turmoil — It isn’t just the head of design who’s left Airbnb recently. The pandemic has led to a number of high-level employees walking out — even Greg Greeley, the company’s former head of homes, left in July. Most of the company’s executive team has joined the company in the last two years, while two top executive positions remain unfilled.

It doesn’t stop there. According to people close to Airbnb, laying off of a quarter of the company’s staff in May sent ripples of discomfort through the company’s remaining ranks. Airbnb has struggled with staff turnover, sources said, and executives have reinstituted bonus plans as a morale-boosting method.

Airbnb doesn’t want a year of stress to affect its long-term prospects — that, at least, we can relate to. The company’s hoping Jony Ive will be an ace in the hole of sorts to lead it into a successful IPO (and beyond). Whether or not the collab pans out in the long run will be something to revisit at a later date.