"Let’s be perfectly clear: you can’t be a values-driven privacy-focused company and an aspiring monopoly with authoritarian policies at the same time.” 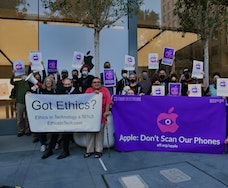 “As a purported champion of privacy, Apple should use its position in the industry to protect more people, including children, by encrypting iCloud and addressing security vulnerabilities in iMessage,” the groups wrote in a press release.

The announcement of NeuralHash, which is meant to automatically flag any child sexual abuse material, was met with immense disdain from privacy watchdogs, the general public, and even Apple employees. The backlash was so intense, in fact, that Apple actually backed down, claiming it would work overtime to improve NeuralHash, rather than releasing it with the latest round of iPhones. Activists want Apple to commit instead to trashing the project entirely.

Apple’s listening — Though Apple initially defended NeuralHash in the face of backlash, enough fuss was made that the company acquiesced just days later. That’s solid evidence that making enough noise can get Apple’s attention.

Fight for the Future and the EFF are banking on the possibility the iPhone-maker might just hear them once again. Their argument is simple: Introducing a tool that’s trained to automatically scan and flag child exploitation for law enforcement could, in the future, easily be re-trained to keep an eye out for any content.

“This software will almost certainly make mistakes, and when it does, the results could be deadly, particularly for LGBTQ+ youth,” said Albert Fox Cahn, executive director of the Surveillance Technology Oversight Project (STOP). “Apple’s software can be hijacked by authoritarian governments in the future to scan users’ devices, giving repressive regimes unprecedented powers to suppress dissent.

The utmost hypocrisy — NeuralHash is the main focus of this series of protests, but the activist groups are also warning of how the photo-hashing update points to larger insincerities in Apple’s corporate messaging. Apple has always prided itself on the iPhone’s privacy features, flaunting them as one of the reasons it’s the absolute best phone for modern times.

Apple’s defense strategy in the wake of the NeuralHash backlash has been to point out that the technology is guaranteed to only throw up one false flag in a trillion images. That statistic doesn’t do anything to quell fears that NeuralHash could be used by governments to target individuals in ways Apple hasn’t intended down the line. If anything, that particular number — one in a trillion — means NeuralHash would, indeed, prove accurate when hijacked by a third party.

Fight for the Future and the Electronic Frontier Foundation have taken to calling NeuralHash “spyware.” It’s a harsh reminder that, despite its lofty promises of privacy, Apple is more than willing to create backdoors when it serves its own interests.