“Certain carve-outs to the law could threaten human rights and silence movements for social and racial justice that are needed now more than ever. Section 230 is a foundational law for free expression and human rights when it comes to digital speech... and creativity of ordinary people, rather than just content that is backed by corporations.”

Letter to Congress and the Biden/Harris Administration on Section 230 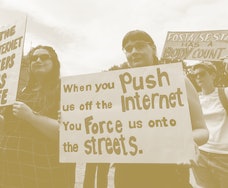 As Congress and the new Joe Biden and Kamala Harris administration prepare their response to the recent riots in the United States Capitol, more than 70 advocacy organizations have written a letter against repealing or making excessive changes to Section 230 of the Communications Decency Act.

Over the past few years and after repeated controversies involving Donald Trump and, most recently, social media platforms like Parler, this law regarding internet speech protections has garnered bipartisan scrutiny. In addition to outright calls to do away with the provision (remember Trump threatening to veto military expenditure over the issue?) some lawmakers have expressed plans to push for dramatic changes to Section 230. President Biden has also maintained the position that it "immediately should be revoked."

Activists, however, warn that this type of overreaction to the provision that provides immunity to website publishers for third-party content could ultimately suffocate free expression online, crush platform-to-platform competition, and completely ignore the issue of violent rhetoric. They also say that tech giants like Facebook and Twitter stand to gain, not lose, in the light of hasty reforms over smaller rivals.

What activists say — "Repealing Section 230 would make it even harder for platforms to engage in good faith moderation of hateful speech and disinformation," the groups collectively wrote. "It could lead thousands of smaller companies and alternative platforms to be shut down, therefore crushing competition and making Big Tech even more powerful. This is why Big Tech CEOs like Mark Zuckerberg have said they are open to 230 reforms, because they know it would only reinforce their influence."

The organizations also implore Congress and the new administration to consider the "intersectional consequences" of broad changes to Section 230, highlighting the potential for further harm against marginalized groups including Black, Brown, and Muslim communities, sex workers, LGBTQ+ folks, and disabled people. In particular, they bring lawmakers' attention to one of the last changes — SESTA/FOSTA — which was presented as legislation aimed to fight exploitation but that critics argue caused many sex workers to become victims of rapid deplatforming measures, losing access to online sex work.

A need for nuance — Signatories also argue that sweeping changes to Section 230 could prevent community organizers and activists from highlighting systemic abuse such as police brutality and surveillance tactics. "Social media platforms would be unlikely to host viral videos of police violence that have spurred nationwide uprisings for racial justice if they faced constant litigation from enforcement for doing so," they warn.

The letter's essential gist argues that Big Tech accountability and reform — which is desperately needed on the internet right now — should not be rushed to pacify bipartisan criticism. Meaningful action and subsequent results would involve a thoughtful and careful amalgamation of data privacy legislation as well as a sincere analysis of civil rights and antitrust laws.